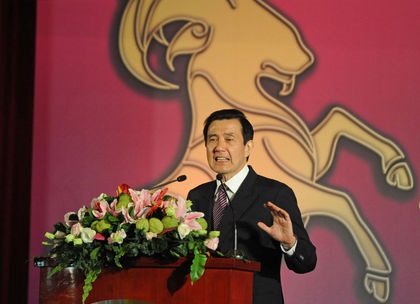 TAIPEI (Taiwan News) – In an apparent continuation of the spat over Legislative Speaker Wang Jin-pyng, President Ma Ying-jeou canceled a planned appearance with Kuomintang Chairman Eric Liluan Chu at the Pingxi lantern festival, reports said Thursday.
The district in New Taipei City, where Chu serves as mayor, is famous for its international festival where lanterns are released into the sky. Chu and Ma were scheduled to attend the event Friday evening.
According to media reports, the president was worried that the recent controversy over Wang would overshadow the cultural nature of the festival, with reporters crowding around to shout questions about their relationship.
However, meetings planned for next Monday with party officials and representatives of its think tank would go ahead, with president and chairman likely to be both present, reports said.
Ma caused widespread surprise when he released a private statement Wednesday expressing his disappointment with Chu’s decision to drop legal charges against Wang.
Since September 2013, Ma has approved of the legal case to strip the legislative speaker of his KMT membership over allegations that he used his influence illegally to try and prevent prosecutors from filing an appeal against a not-guilty verdict for a top opposition lawmaker.
Wang sued and won each step of the way, with only one possibility of appeal left for the KMT. Just before last November’s local elections, Ma emphasized he would go ahead with the appeal, but after the KMT’s devastating losses in the polls, he resigned.
After Chu was elected the new party leader, he heeded calls for reconciliation and revamped the KMT’s disciplinary structure. The changes culminated with his announcement Wednesday that the KMT no longer wanted to use attorneys to take the case to the Supreme Court. He emphasized that Wang was truly a member of the party and would remain so.
Ma’s public reaction against Chu’s announcement was the first sign of a potential rift between the president, whose term ends in May next year, and the new chairman, one of the party’s rare popular politicians.