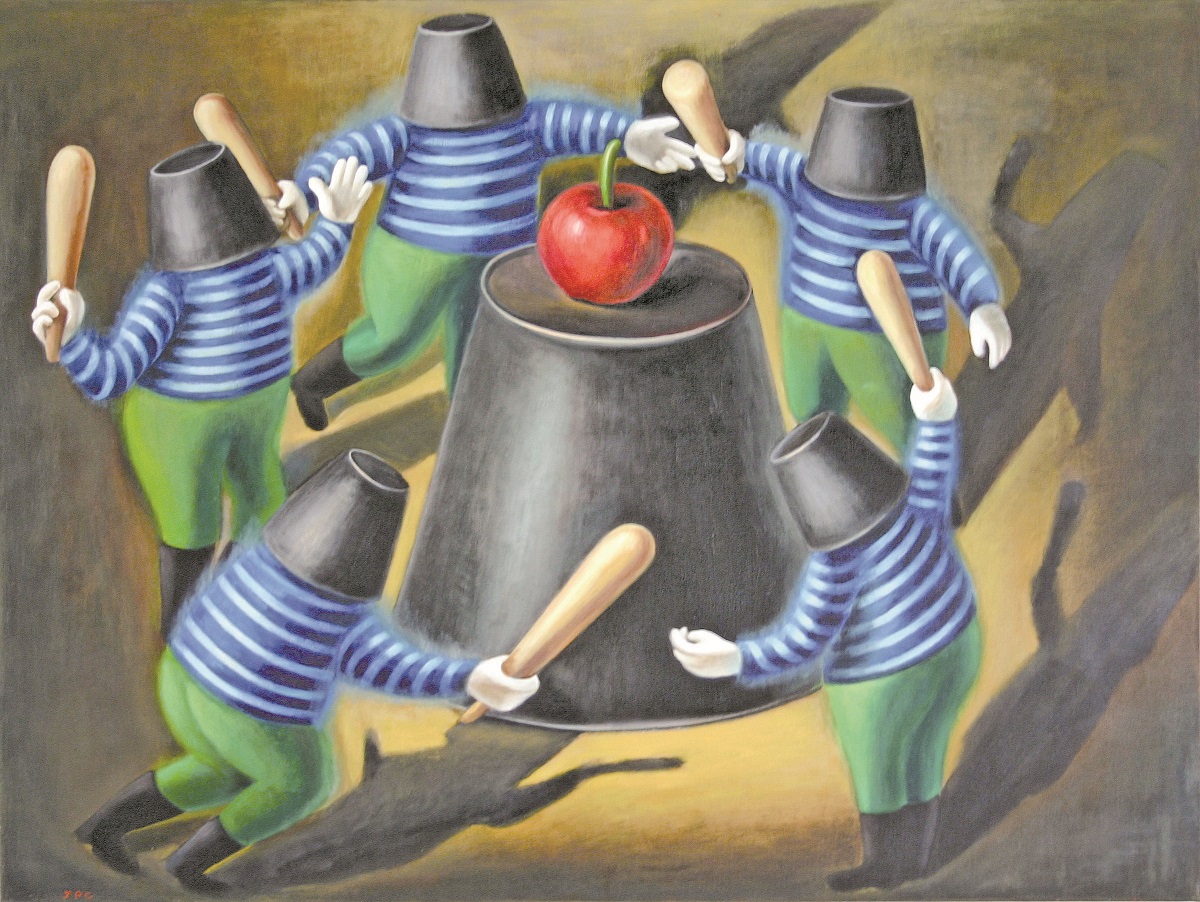 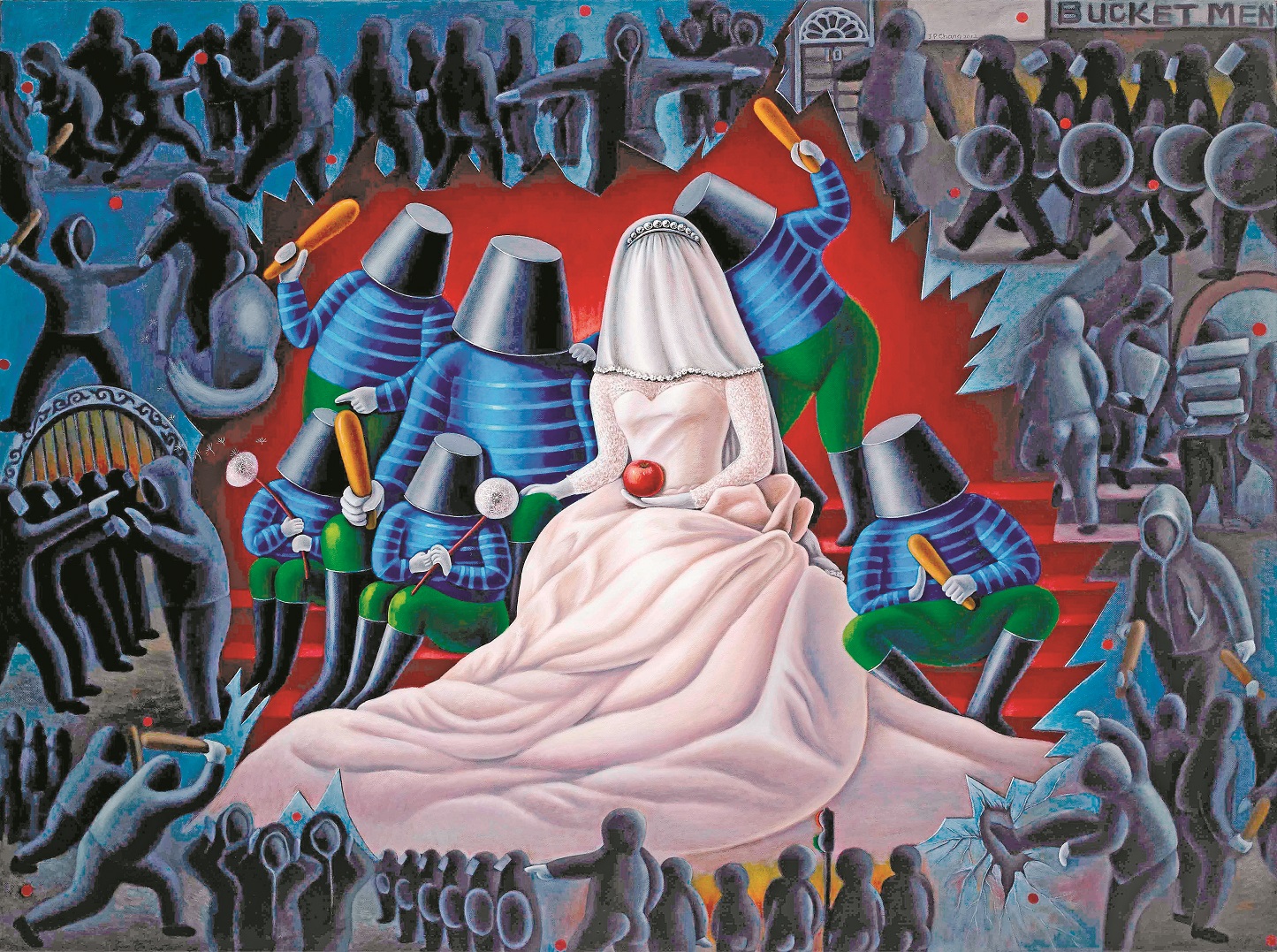 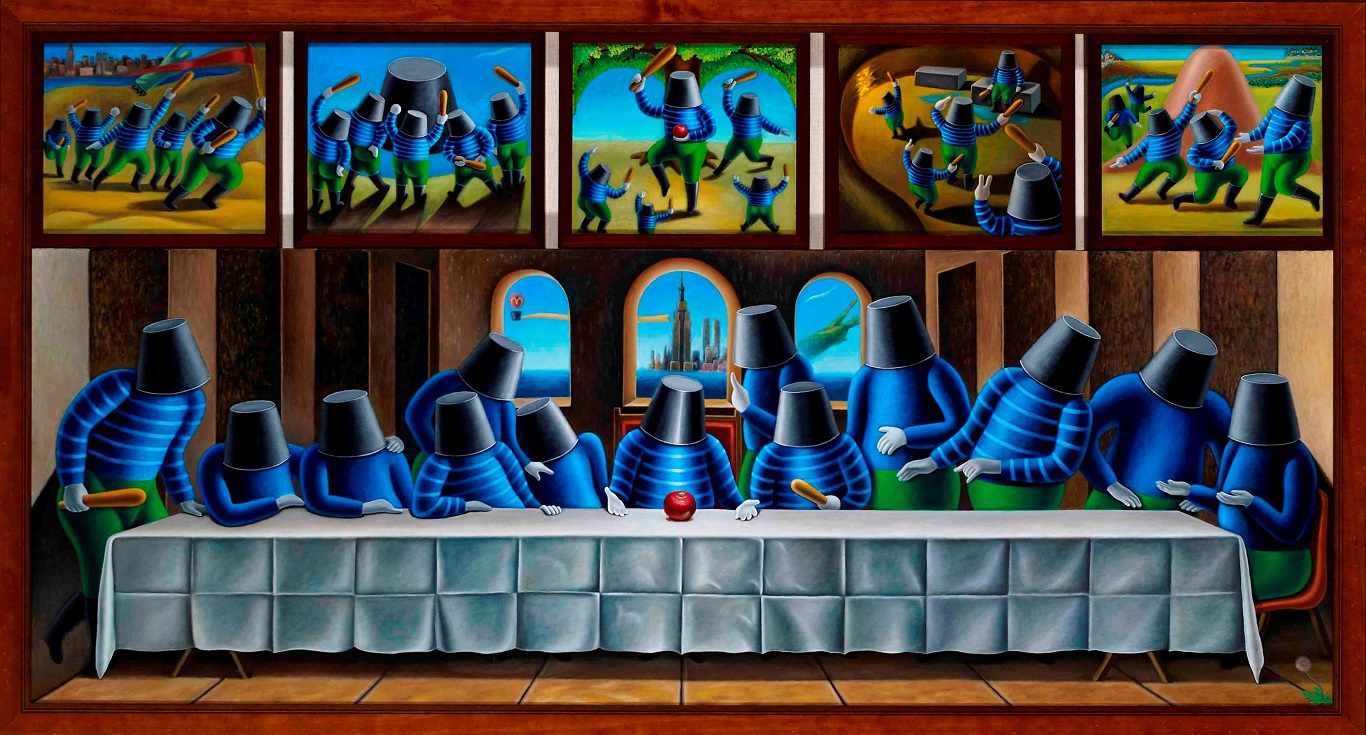 
Chang Jui-Pin, who was born in Taiwan and got her art degree at Taipei National University of Arts here before studying further in the United States, paints her trademark buckets over figures’ heads on currency notes from around the world.

And she is certainly making a lot of "Money."

While the money paintings were fun and won her a whole host of new admirers, it is for her famous Bucket Men paintings that Jui-Pin is best known. And we have the dopey driver of one of London’s famous red double-decker buses to thank. For it was after he failed to look where he was going and knocked Jui-Pin, who at that time was teaching art in London, off her bicycle, that she suddenly had her Eureka moment.

Fortunately she was not badly hurt but she was shaken up and suffered some concussion. And as she came round she had a dream. “In it,” she recalls, “I saw a bunch of small people with their heads covered by buckets descending from the heavens. With clubs in their hands they danced around me.

“I was scared. So panicking, I took a bucket and placed it over my head. Suddenly a miracle happened. The bucket hid the emotions on my face from the outside world. Nor could I see the dangers that lay beyond the bucket.”

“I was no longer scared. I picked up a club, feeling brave, I joined the dancing bucket men in their travels around the world.”
Soon these mysterious characters, their heads hidden under black buckets but identically dressed in blue jumpers with horizontal white stripes and either carrying a phallic-looking club or clutching an apple, began appearing on graffiti sites around London.

As one New York blogger put it: “Once in a while you come across some cool street art which is observed by a walk perhaps a smile, perhaps a photo with your cellphone and a quick share on Twitter, maybe it’s a message … or maybe it’s The Bucket Men.”

Other more erudite critics drew parallels between the Bucket Men and the dystopian Brave New World depicted by author Aldous Huxley in his 1932 novel, or even George Orwell’s 1984.The Bucket Men, though, were too big a phenomenon to be limited to graffiti on the walls of some derelict London buildings. Soon they had developed an energy of their own, and Jui -Pin was painting them in intricate historical scenes on giant canvasses.

And now with several major exhibitions in Taiwan, European countries, America and the Far East behind her, she has a growing legion of admirers and fans around the world. This is the era of the Bucket Men.