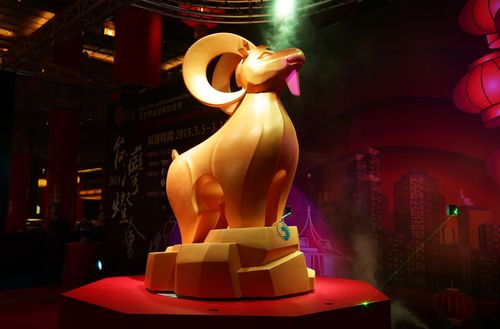 Taipei, Feb. 25 (CNA) The 2015 Taiwan Lantern Festival will be held in central Taiwan's Taichung this year, where merchandise featuring local craftsmanship will light up the stage starting with a soft opening Feb. 27, the Tourism Bureau said Wednesday.
The annual festival, which partially opens in Fengyuan District, will integrate local craftsmanship such as paper art and pottery into its program, the bureau said.
For instance, there will be a display of 1,000 handmade paper installations based on the Chinese zodiac sign of the goat to celebrate the Year of the Goat, said bureau official Chen Kuei-hua.
The artworks will be provided by CartonKing, a paper design company based in Taichung, which will also create paper installations featuring Taichung landmarks such as the Taichung Park, Chen said.
The festival will officially kick off March 5 near the city's high speed railway station, featuring its main lantern, a 23.4-meter-tall goat, according to the bureau.
There will also be some 100 performances throughout the festival through March 15, including those from the Chio-Tian Folk Drums & Arts Troupe, the Chiung Jung Dance Troupe and the Taichung Chamber Choir, it said. (By Lee Hsin-Yin)