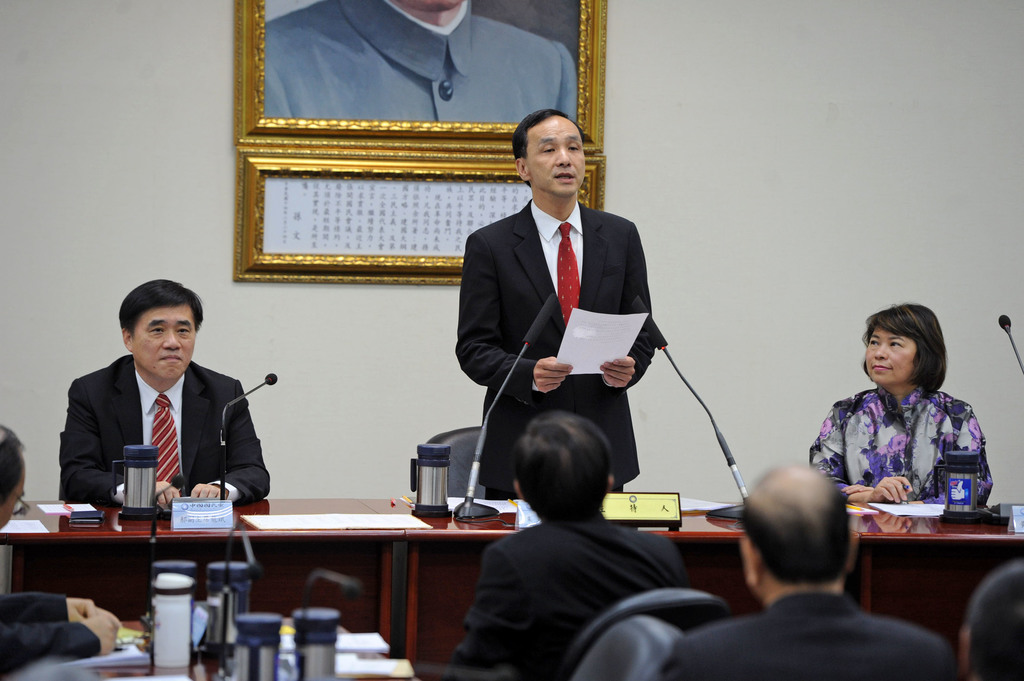 TAIPEI (Taiwan News) – Kuomintang Chairman Eric Liluan Chu announced Wednesday that the party would drop its legal action against Legislative Speaker Wang Jin-pyng, but President Ma Ying-jeou expressed his strong disapproval.
The dispute between the leadership, or its previous chairman Ma in particular, and its own most powerful lawmaker has racked the ruling party since September 2013.
Addressing the KMT’s Central Standing Committee Wednesday, Chu said there was no doubt that Wang was still a party member. There was no need to entrust an attorney again to pursue the case in court, he said, signaling an end to the KMT’s legal action against Wang, which ended each phase in victory for the legislative speaker in his campaign to remain a party member.
In response to the opinions of the courts and the public, the previous CSC meeting had already approved reforms in the way the party’s Evaluation and Discipline Committee was formed and operated, Chu said. The measures by the original committee taken against Wang would have to be reconsidered by the new committee, the new leader said.
In a personal statement issued after Chu’s comments became public, Ma distanced himself from the move. “I must strongly express my disappointment and my inability to agree,” the president was quoted as saying.
The Taiwan High Court verdict about the Wang case and the KMT refusal to appeal would have dire consequences for all future election campaigns as they would allow more breaches of party discipline, Ma said in the 1,500-character statement.
“The party’s credibility and its system had suffered irreparable damage” as a result of the court verdict, he added. The president also warned that the KMT should stand for the truth and for the defense of its core values, or it would be unable to satisfy its members.
The conflict with Wang was seen as one of the most urgent issues Chu faced after he took office as party leader last January 19. President Ma, who resigned from the KMT chairmanship after its devastating losses in November’s local elections, recently said the party should stick by its basic values, which was interpreted as a strong position against any leniency for Wang.
Ma and Wang were long seen as rivals, even running against each other for the party chairmanship when the KMT was in opposition. In September 2013 however, a full-blown power struggle erupted when prosecutors accused Wang of having unduly used his influence in a legal case against the top opposition lawmaker.
Ma supported the allegations of illegal influence peddling and threw his weight behind the KMT’s Evaluation and Discipline Committee’s decision to strip Wang of his party membership, which would also have ended his legislative career.
The speaker however won an injunction valid for as long as he pursued the case in court. After the KMT’s November 29 electoral defeat, calls to drop an eventual appeal against the latest court ruling in Wang’s favor grew louder.
Reacting to Wednesday’s announcement, KMT lawmaker Lu Chia-chen expressed his approval. A continuation of the legal case against Wang would only have pleased the ruling party’s enemies, he said. Another prominent lawmaker, Wu Yu-sheng, said the approaches of the two consecutive KMT chairmen had been completely different. He counseled against interpreting Wednesday’s decision as a preparation for Chu and Wang to run together on the KMT ticket for next year’s presidential election.