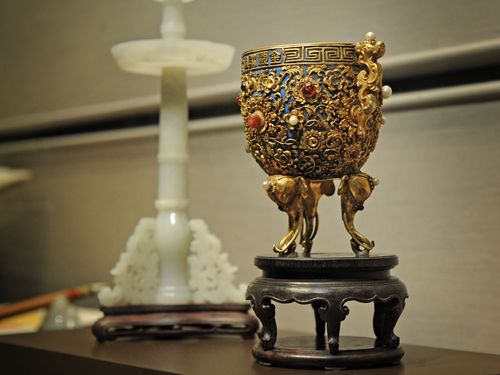 Taipei, Feb. 23 (CNA) It was ancient common practice in China for people to drink tusu herbal wine during the Lunar New Year holiday in the hope of protecting themselves from disease and "evil spirits" while praying for health and long life, according to an exhibition currently running at the National Palace Museum (NPM) in Taipei.
Although this festive practice has vanished from the modern world, people can get a glimpse of it at the exhibition, titled "Tusu Wine: The Emperor's First Drink of the Chinese New Year," which opened Dec. 31, 2014 and will run through March 25.
Citing historical documents, NPM assistant researcher Hou Yi-li said Monday that the practice of drinking tusu wine on the first day of the first month of the year on the lunar calendar used to be a traditional custom, but no longer exists in Chinese society.
The documents show that tusu wine is first mentioned in Ge Hong's Prescriptions for Acute Diagnoses from the Eastern Jin dynasty (317-420 A.D.), and medical texts through the ages record a similar kind of alcoholic beverage, indicating that it was a type of medicinal wine, according to the museum.
Its recipe differs among the various texts, but generally includes seven or eight herbs in various proportions, with the preparation involving placing rhubarb and herbs in a silken sachet suspended at the bottom of a well on New Year's Eve.
Brought out on New Year's Day, it would be steeped in alcohol and every member of a family, no matter how young, would take a sip while making a toast to the east and praying for a pestilence-free year.
Hou said that the order for drinking tusu wine would start with the youngest family member and proceed to the oldest, bestowing New Year's blessings for the young and long life for the old. Tusu wine thus became a symbol of the New Year and longevity, as seen in traditional poetry and painting, he added.
The NPM exhibition manifests how the Qing emperor Qianlong greeted the New Year each year by holding a "First Stroke" ceremony in the Eastern Warmth Chamber of the Hall of Mental Cultivation, in which he would use the "Gold Chalice of Eternal Stability" to drink tusu wine and light the "Jade Candlestick of Constant Harmony" to beseech favorable weather for the coming year.
The gold goblet symbolizes the firmness of political authority, according to the museum.
The emperor would then take the "Brush Verdant for Ten Thousand Years" to write auspicious phrases of blessings for the New Year as part of a ritual to pray for peace and prosperity throughout the land, the museum said.
The exhibition is divided into three sections -- "Explaining Tusu," "Writings About Tusu" and "Drinking Tusu."
Rare books, paintings, calligraphy and antiquities from the palaces of the Qing emperors Qianlong and Jiaqing are displayed to "present the allusions and symbolic importance associated with tusu wine, as well as the beauty of the Qing court wine vessels related to the consumption of tusu wine," the museum said. (By Lung Pei-ning and Elizabeth Hsu)