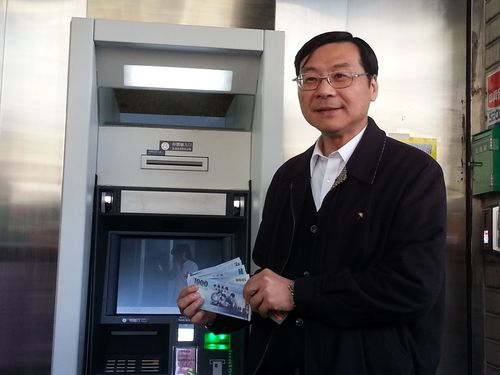 Taipei, Feb. 23 (CNA) Nearly NT$30 billion (US$945.63 million) was withdrawn from automatic teller machines (ATMs) around Taiwan over the six-day Lunar New Year holiday period that ended Monday, according to statistics.
From Feb. 18 to 4 p.m. Monday, a total of NT$29.34 billion in cash was withdrawn from ATMs around the country, according to the statistics compiled by the Financial Information Service Co., which worked closely with the Central Bank to ensure smooth cash withdrawals and transfers during the holiday season.
The Lunar New Year holiday is often the peak season for ATM use for withdrawing cash or transferring money, as many people give money to their family elders and children in lucky red envelopes over the holiday period, which is also a major shopping season for many who have just received their year-end bonuses.
This figure means that on average, everyone in Taiwan withdrew about NT$1,275 over the holiday period. Taiwan has a population of 23 million people. Over the holiday season, Taiwan also saw a total of NT$12.97 billion in inter-bank money transfers, the Financial Information Service Co. said.
The company was founded in 1998 to provide financial institutions with better and more flexible interbank operations and services. (By Pan Chih-yi and Elaine Hou)