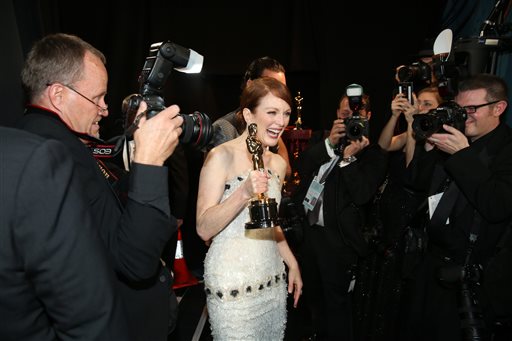 The 54-year-old actress added an Academy Award to the Golden Globe and Screen Actors Guild trophies she won earlier for her role as a college linguistics professor and mother of three who is diagnosed with early-onset Alzheimer's.

Moore did four months of research for her role, talking to women with the disease and doctors, and she visited a long-term care facility.

The actress who got her start on the soap opera "As the World Turns" has been nominated for an Oscar four previous times; this year, she was the front-runner throughout awards season.

"This is just amazing," she said backstage, clutching her statuette and grinning.

Moore was sent on her way to the stage by husband-director Bart Freundlich, who is 45.

"I read an article that said that winning an Oscar could lead to living five years longer," she said. "If that's true, I'd really like to thank the academy because my husband is younger than me."

Moore saw a rough cut of the film for the first time with Freundlich.

"When we walked out of there, he said, 'You're going to win an Oscar,' and I was like, 'Come on,'" she said backstage. "That's how much he supported me from the very, very beginning."

Moore won over Marion Cotillard of "Two Days, One Night"; Felicity Jones from "The Theory of Everything"; Rosamund Pike of "Gone Girl"; and Reese Witherspoon of "Wild."