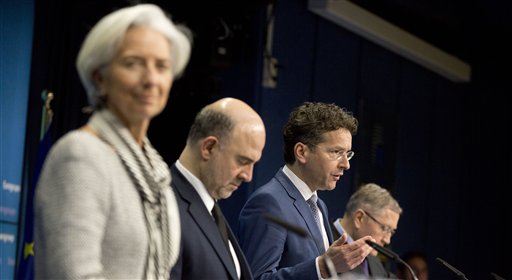 BRUSSELS (AP) — Following weeks of recrimination and distrust, Greece and its creditors in the 19-nation eurozone reached an agreement Friday on extending the country's rescue loans, a move that should dramatically ease concerns it was heading for the euro exit as soon as next month.

The agreement, which looked a long way off Thursday when one German official compared Athens' request for more time to the infamous Trojan Horse, will mean that Greece will avoid going bankrupt, at least over the four months of the extension. It should also mean that capital controls won't be needed and that Greek banks will have enough money to stock up their ATMs.

To get the money though, the Greek government has one more hurdle to clear. On Monday, it has to present a series of unspecified economic reforms measures that are deemed acceptable by creditors and rooted in Greece's previously enacted bailout agreement — something the government had promised not to do.

Still, the Greek government will be the author of the reforms pursued and that represents a change from the past five years when Greece has relied on rescue money to avoid going bankrupt and was effectively ordered to enact a series of austerity measures.

"We have established common ground again," said Jeroen Dijsselbloem, the eurozone's top official, after the meeting in Brussels.

And Greek Finance Minister Yanis Varoufakis said the deal allows both Greece and Europe "to turn a page ... As of today, we are beginning to be co-authors of our destiny."

Varoufakis conceded that the Greek government would be "in trouble" if the reform measures, which are likely to include a series of measures to tackle corruption and tax evasion aren't backed by representatives from the European Central Bank, International Monetary Fund and European Commission — previously known as the troika.

However, he insisted they "won't be shot down by the institutions."

If the list of reforms is sanctioned, then it will be further detailed and agreed upon by the end of April.

Friday's agreement was clinched just a week before Greece's 240 billion-euro ($270 billion) bailout program expires and is aimed at buying time for both sides to agree on a longer-term deal to ease the burden of the bailout loans.

The Greek government isn't getting the time it requested Thursday. Instead of the six-month bailout extension it asked for, it's getting four — with Greece having to make big debt repayments after the new cut-off point, that's a sign that its creditors aren't willing to give Athens free rein.

Still, following weeks of tense negotiations in the wake of the election of the new left-wing Greek government, the final deal showed an element of compromise by both camps and investors appeared to breathe a sigh of relief with the Dow Jones index closed at a record high Friday as news of the Greek deal broke.

Brinkmanship was just one of the games that was referenced over the past few weeks of discussion. More often than not, it was German Finance Minister Wolfgang Schaeuble, who was the bulwark against the Greek government's ambitions.

But he emerged from Friday's meeting in conciliatory mood. "This is an important step forward," he said.

Schaeuble will no doubt be making sure that the promises Athens has made for the coming months will be kept.

"We are now in the process of confidence building," he said. "That's why there are strict conditions."

As well as presenting a list of reforms by Monday, the Greek government has committed to honoring its financial obligations to all creditors "fully and timely."

In addition, it has committed to make sure that it continues to post primary fiscal surpluses — what's left in the budget after debt-related payments. However, it looks like the government has managed to convince creditors to reduce the amount of that surplus in response to the worsening economic outlook for Greece this year. In the statement outlining the broad thrust of the agreement, the eurogroup said "the economic circumstances in 2015" will be taken "into account."

Varoufakis claimed that as a victory as it will could free up some cash to help pay for public services. Pensions, he insisted, would not be cut as previously planned.

Greece also made the concession to not take any measures that might negatively impact budget targets, economic recovery or financial stability. Previously, it had sought to loosen its budget somewhat.

Dijsselbloem said Friday's agreement was a "first step in this process of rebuilding trust" between Greece and its euro partners and allows for a strategy to get the country "back on track."

"Trust leaves on horseback and returns on foot," he said.

Varoufakis claimed the deal was a win for his country because his government will be able to decide what reforms to propose.

"The weekend will be one of joy and creativity," he said. "We are writing our own reforms."

Varoufakis said the substance of Friday's deal was to all intents and purposes the same as the government's proposal to the eurozone on Thursday.

He also said the deal has put paid to the view that ATMs would run out of cash and that he had no doubts that Greek bank shares will rebound.

"Greek depositors will be reassured," he said.

Raf Casert in Brussels and Geir Moulson in Berlin contributed to this report.