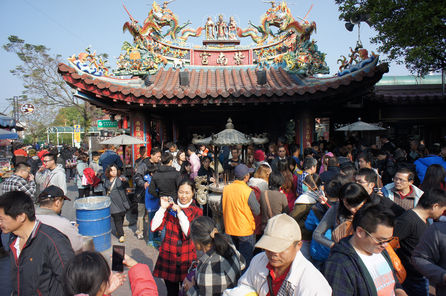 Taipei, Feb. 19 (CNA) Jhushan Zi Nan Temple in Nantou County has emerged as the most popular temple for people praying for wealth in the upcoming Year of the Goat, a recently conducted online survey has found.
The temple in Jhushan Township in the central Taiwan county topped the list with 10,175 votes in a survey conducted by yam.com from Jan. 7 to Feb. 4.
The temple, which honors the Chinese earth god Tu Di Gong and his wife, attracts thousands of believers every year who wait in lines kilometers long to get special coins believed to bring wealth if placed in the right spot at home or in the office according to Feng Shui rules.
The Tu Di Gong is seen as the wealth god by local businesses.
On the first day of 2015, over 20,000 people showed up for the coins from the well-known temple and formed a line estimated at seven kilometers long. On one side of the coin this year was a portrait of the earth god while the other was inscribed with a goat to signify the Year of the Goat.
The goat was surrounded with five bats to signify luck as the word for "bats" sounds like the word for "luck" in Mandarin.
The temple has promised to hand out the coins again on Feb. 19, the first day of the Year of the Goat.
Next on the list of Taiwan's most popular temples for fortune seekers was Nanshan Fude Temple in Zhonghe District, New Taipei, which received 9,323 votes.
The hillside temple, which also honors the Chinese earth god, is popular because it is open 24 hours a day and offers a panoramic view of Taipei at night at an elevation of 302 meters.
Visitors often trade coins in bigger denominations for two NT$1 coins at the temple and keep them in their pockets, which is believed to bring wealth. Visitors also flock to the temple to rub the gold ingot in the earth god's hand.
The temple that won the third highest number of votes was Fu'an Temple in Checheng Township in Pingtung County, the largest earth god temple in Taiwan. The temple received 8,892 votes.
The 353-year-old temple is known for a paper money burner the temple spent NT$6 million (US$189,780) to build. The burner is dubbed the earth god's bill counter because it's designed to easily soak up any money tossed into it. Local folk culture experts offered a few tips to believers seeking to touch the gold ingot in search of wealth. They said it was imperative that visitors wear clothes with pockets or bring a bag to bring their fortune home.
Second, believers have to follow the correct routine in rubbing the ingot to gain their fortune. They should rub the ingot from back to front three times and toward their pockets to ensure that "money" is funneled in the right direction. (By Scully Hsiao)