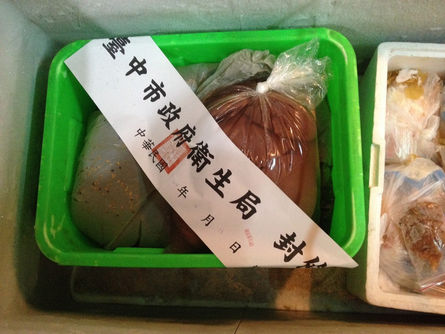 Duck blood sold by the Shuang-peng Company of Taichung has been found to come from ducks that were fed grains contaminated with feces and feathers. A preliminary investigation by the Food and Drug Administration (FDA) of the Ministry of Health and Welfare disclosed that as of 2:00pm Saturday a check of 363 shops had resulted in pulling 10,033 kg of suspect duck blood off the shelves.

The company is also under suspicion on charges that it has mixed cheaper chicken blood in with the goose blood to pad its profit margins, as well as adding potassium alum, a double sulfate of aluminum which can cause problems for people with kidney problems. Aluminum from foods as well as cooking utensils is suspected of being a factor in Alzheimer’s Disease, weakened bones and other ailments when ingested over long periods of time. Potassium alum is mixed in with duck food by unscrupulous farmers as it makes the duck meat look plumper as well as chewier and tastier.

According to the FDA, Shuang-peng markets duck blood to outlets in Shulin District in New Taipei City, Wuri District in Taichung and Pingtung City which are responsible for distribution in northern central and southern Taiwan respectively. Most of the end users are restaurants specializing in hot pots and food seasonings. Products at the three distribution centers have been sealed, with the amounts of finished and semi-finished goods on hand totaling 24,300 kg, 122,678 kg and 20,000 kg respectively. The FDA said that any downstream retailers found still selling Shuang-Peng duck products may be fined NT$30,000 to 3 million under Articles 7 and 47 of the Food Sanitation Management Act.

Shuang-peng faces a fine of NT$5 million under Article 15 of the Food Sanitation Management Act for improper use of raw materials and the marketing of tainted blood food products. A Sunday morning announcement by Taichung prosecutors said the number of downstream manufacturers with suspected blood could be as high as 400. The list includes a number of well-known businesses such as Tripod King, Old Sichuan, Shin Yeh and Elixir Health Hot Pot as well as restaurant chains such as Fat Calf, A-kuan Hot Pot, Noble Steak House, San-ma Stinky Hot Pot and other prominent names in the food industry. All of the restaurants suspected of having purchased Shuang-peng duck blood have stopped using the product.

Dr. Yan Tsung-hai of the Toxicology Department of Chang Gung Memorial Hospital physician notes that aluminum in the blood is metabolized by the kidneys. Yan counsels those who are concerned that they may be ingesting aluminum to drink plenty of water. This helps the kidneys to remove aluminum from the blood and flush it from the system.