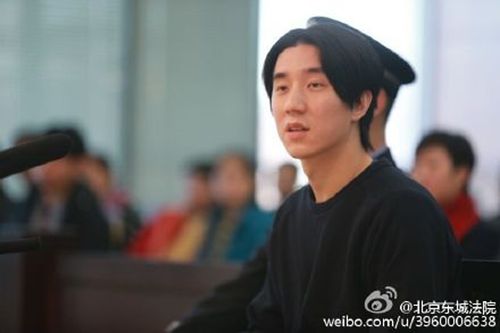 Hong Kong action superstar Jackie Chan said he will not speak on behalf of his son Jaycee Chan at a press conference Thursday, the day before the younger Chan was set to be released from a Chinese jail for using marijuana.

Asked about the matter at a press conference to promote his new movie "Dragon Blade", he paused briefly before saying "I will be happy" to see that "little bastard" again.

"I don't feel like saying anything for him. He is a grown man and he has his own arrangements," he said in Mandarin.

"I believe he will face up to his own life after his release. I am actually more at ease now."

Beijing police arrested Jaycee Chan, Taiwanese actor Kai Ko and another individual identified by the surname Li on Aug. 14 last year for smoking marijuana, a crime in both China and Taiwan.

The younger Chan was sentenced to six months in prison and a fine of 2,000 Chinese yuan (US$320) for the offense.

As Chan has been in custody since Aug. 14 last year, his jail term will end Feb. 13, according to the verdict.