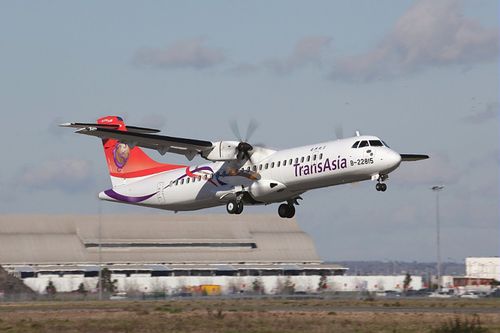 Taipei, Feb. 12 (CNA) Still reeling from last week's deadly crash, TransAsia Airways announced Thursday it will cancel 44 domestic flights scheduled for Friday, as only 39 pilots are cleared for flight duties after 10 pilots failed emergency preparedness tests.
TransAsia already called off 34 flights Thursday following the oral test conducted Tuesday, which covered basic knowledge such as ways of dealing with emergencies.
The cancellations are yet another hit against the local carrier after one of its ATR 72 turbo-prop planes crashed Feb. 4, killing 43 of the 58 people onboard and prompting the re-evaluation of pilots' competency after the black box recording indicated human error may have been the cause of the crash. The last victim was found Thursday, the government said.
TransAsia was already in hot water because another one of its ATR 72 planes crashed on the outlying island county of Penghu last July, killing 48 of the 58 people onboard.
TransAsia President Fred Wu admitted Thursday that the test results from earlier this week were "unacceptable" and said the carrier will retrain its pilots under Civil Aeronautics Administration's (CAA) guidance.
The 10 failing pilots along with 19 others who were not been tested because they were overseas or on vacation will be barred from flying Until they pass, the CAA has ordered.
For TransAsia, the pilot shortage has already affected flights this week and the chaos could last into the normally lucrative Lunar New Year holiday season, when air traffic peaks.
According to the CAA, one-way seats available on TransAsia's domestic flights, which operate on ATR aircraft, may see a massive reduction of 40 percent to just 1,800 per day.
The CAA said it has demanded TransAsia bring out its Airbus A321/320 jets to help meet travel demand, asking other local airline carriers to operate more flights during the holiday period.
Any changes to the airline's flight schedule after Friday will be posted on its official website, TransAsia said. (By Lee Hsin-Yin)