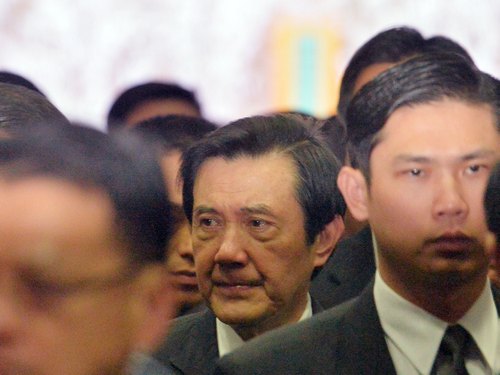 Taipei, Feb. 10 (CNA) President Ma Ying-jeou led a group of Cabinet officials in mourning those killed in the Feb. 4 TransAsia Airways plane crash at a public funeral service in Taipei Tuesday.
Ma bowed before an altar set up for the air crash victims at a funeral parlor operated by the Taipei City Mortuary Services Office, and then delivered his condolences to the victims' families.
Almost all top-ranking government officials attended the funeral service, including Premier Mao Chi-kuo.
Meanwhile, government agencies across the country flew national flags at half-mast to mourn the victims.
The ATR 72-600 turboprop plane crashed into the Keelung River in Taipei just minutes after taking off from Taipei Songshan Airport.
Of the 58 people on board, including five crew members, 40 had been confirmed dead, with three still missing and 15 survivors, as of Tuesday afternoon.
Despite low temperatures, search and rescue workers continued to look for the three individuals, identified as two Chinese nationals and one Taiwanese national. (By Wei Shu and Elizabeth Hsu)