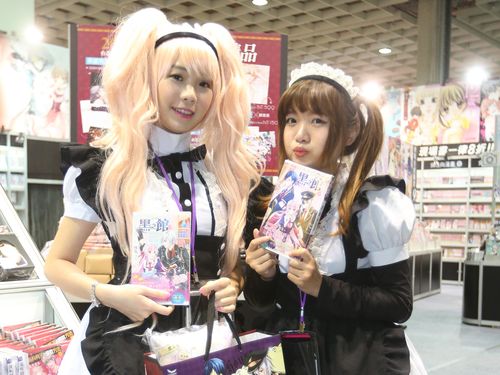 Taipei, Feb. 10 (CNA) Enthusiastic comic fans poured into the Taipei International Comics and Animation Festival on its opening day on Tuesday, eager to snatch limited edition products.
Swarms of fans were seen lining up at the festival venue early Tuesday morning and rushing to the most popular stalls when the fair opened at 10 a.m. Some fans had been waiting in line for as long as a month.
Lee Pei-mao, 29, said she spent NT$2,600 (US$82) on a limited edition pillowcase and comforter cover of Japanese anime series "K."
"I like the storyline. It is refreshing and exciting," she said of the anime series, which is about a schoolboy who is caught in a war between seven kings. Ting Huang, who waited in line since 6 a.m. Tuesday, spent NT$800 on books by Taiwanese light novelists Yu Wo and Lan Chi Tso Jen.
The 16-year-old Huang said she began reading Yu Wo's novels since the age of 9 and was drawn to the author's humor.
Close to 60 exhibitors are taking part in the festival, now in its third year. Organizers hope that it will attract 400,000 visitors this year.
The festival will run until Feb. 15 at the Taipei World Trade Center Nangang Exhibition Hall. (By Christie Chen)