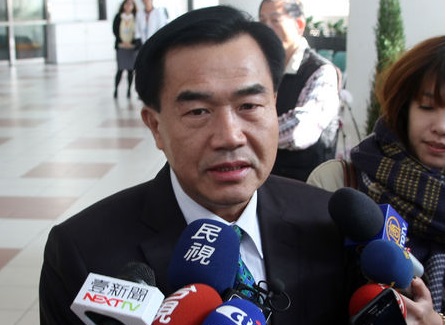 TAIPEI (Taiwan News) – Tainan City Council Speaker Lee Chuan-chiao and three other local political figures were ordered detained early Tuesday morning in the snowballing investigation into vote buying.
After the local election last November 29, former KMT lawmaker Lee won the December 25 vote for speaker despite the fact that the opposition Democratic Progressive Party controlled an absolute majority on the council. Immediately, allegations of vote buying surfaced, and Tainan City Mayor William Lai announced a boycott of the new speaker.
Following a request from prosecutors Monday, the Tainan District Court agreed after midnight that Lee and three other suspects should be kept in solitary confinement to prevent them from colluding or from escaping the country. Lee was intercepted at an airport over the weekend, presumably on his way to Xiamen in China. He reportedly said he was on his way to attend a wedding.
The others were local DPP official Tsai Chi-hsin, Lin Tsung-pin, a vote broker reportedly affiliated with the KMT, and former councilor Yang Ming-ta. Another DPP official, Pan Hsin-chuan, was freed on bail of NT$200,000 (US$6,300). They reportedly helped Lee to contact new councilors who might be willing to change their stance and vote for him.
Amounts of money promised to the councilors varied between NT$300,000 (US$9,500) and NT$10 million (US$317,600), reports said.
Lai has won widespread public support for his strong stance against the new speaker, refusing to allow the members of his administration to be questioned by the council. His approach was believed to have contributed to a short-lived campaign pushing him to run for president, which he later rejected.
Nevertheless, DPP Chairwoman Tsai Ing-wen said Tuesday she was angry at the fact that two local party officials had been involved in a conspiracy to help alleged vote buying by a KMT candidate.
“If the people vote for us, we should not backslide into corruption with the KMT,” she wrote on her Facebook page, accusing the DPP members implicated in the affair of damaging Taiwan’s democracy and the opposition party’s supporters.
The DPP would not give its members any leniency if they were involved in Lee’s scheme, officials said ahead of a disciplinary meeting scheduled for Wednesday. The wayward members were likely to face expulsion from the party, reports said.
In late December, the DPP already threw out five members of the Tainan City Council who had failed to show their ballots during the speaker election as demanded by the party.
A taskforce had interviewed several other councilors who were willing to provide information about the vote buying, reports said. The party group had also been cooperating with prosecutors, a DPP spokesman said.