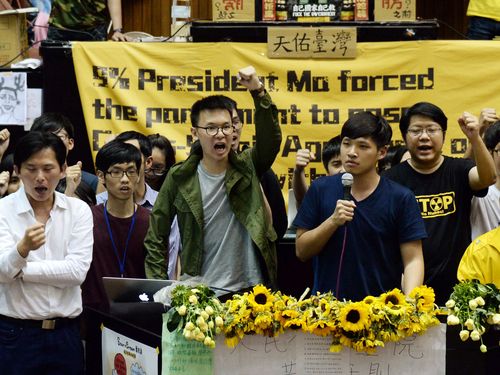 TAIPEI (Taiwan News) – A total of 118 leaders and members of the Sunflower Movement which occupied the Legislative Yuan last spring were indicted Tuesday.
The list included Lin Fei-fan, Chen Wei-ting and Huang Kuo-chang, two students and an academic who were the most visible leaders of the action, which was directed against an attempt by ruling Kuomintang lawmakers to pass a trade pact with China without the promised review.
The Taipei District Prosecutors Office on Tuesday announced the results of its investigation into three related incidents, the March 18-April 10 occupation of the Legislature, the March 23-24 intrusion into the Executive Yuan, and the April 11 siege of the Zhongzheng District First Police Precinct building.
A total of 22 Legislative Yuan occupiers, including Lin, Chen and Huang, were charged, while the failed occupation of the Executive Yuan building produced 93 indictments. Activist Hung Chung-yen and three others were reportedly charged for their action against the police. Student leader Wei Yang was charged in several cases, bringing the total of people indicted Tuesday to 118.
Lin, Chen, Huang and Wei were charged with incitement to commit a crime but not with breaking and entering nor with damaging property at the Legislative Yuan. Lin received the additional charge of obstruction of public duties because of his aggressive behavior toward police, reports said.
The participants in the failed occupation of the Executive Yuan were charged with breaking and entering though and with incitement to crime. The group ransacked offices belonging to top government officials and were forced out the next morning by police using batons and water cannons, which led to legal action against the authorities.
After the Sunflower Movement left the Legislative Yuan on April 10, police took action against a small group of members of the Taiwan Referendum Alliance who had been camping outside with a permit. For the scuffles which resulted from that action, TRA leader Tsay Ting-kuei was indicted for several violations, including obstruction of public duties, incitement to interference with public duties and breaking the Assembly and Parade Act.
An attorney for Huang told reporters he respected the decision of the prosecutors and thanked them because his client would have the opportunity to explain the conflict between the right of citizens to demonstrate and the right of the authorities to use the criminal law in a court of law.
Huang said he had not incited people to violence, but to conduct protests against the abuse of power by the administration of President Ma Ying-jeou and to save Taiwan’s democracy from the abyss.
Lin would continue to serve his military service while a court verdict was awaited, the authorities said.
Chen wanted to run for legislator in last Saturday by-election in Miaoli County, but dropped out of the race after several allegations of sexual harassment came to light.