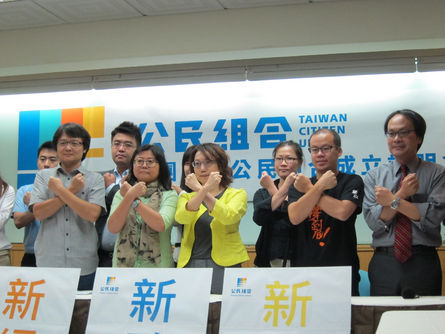 One day after former DPP Chairman Su Tseng-chang's daughter Su Chiao-hui announced that she planned to enter the world of politics, scholar Yung-ning Hsu and former DPP Youth Division Director Chou Yung-hung poured a bit of cold water on her aspirations. The two announced the results of the latest opinion poll from the Taiwan Think Tank Monday, with Chou noting that recent polls show that in legislative elections, 20-29-year-old voters are more likely to support non-party candidates than members of either the KMT or the DPP. He said that any second-generation member of the DPP seeking to make an entry into the political world at this point should keep this development in mind.

Taiwan Think Tank’s poll results continue to show glum figures for the ruling party regarding public opinion of the nation’s leaders. The people are not happy with either the president or the premier, with 68.1% of those surveyed indicating they are not satisfied with the performance of President Ma Ying-jeou, while 48.4% feel that new Premier Mao Chih-kuo’s performance has been unsatisfactory so far.

Things look better for the heads of the island’s two major parties. 52% of those surveyed expressed satisfaction with recently-installed KMT Chairman Eric Chu, while 63.3% said they are happy with the performance of DPP Chairman Tsai Ing-wen.

Regarding more recent events, the poll covered public opinion regarding Saturday’s legislative by-election, in which the KMT held on to its two seats in Miaoli County and Nantou County while the DPP retained its three spots in Taichung City, Changhua County and Pingtung County. The survey showed that 42.9% of those polled felt the results represented a draw between the KMT and the DPP, while 36.2% called it a win for the Greens.

Looking ahead to projected levels of support in next year's legislative elections, the poll indicated that overall support for the DPP now stands at 31.2%, with 18.5% of respondents showing support for the KMT and 14.5% saying they would support non-party candidates in the 2016 legislative elections. 51.8% of respondents believed the DPP would garner more than half of the available seats while only 15.6% said the KMT would take more than half.

Hsu, a professor of political science at Soochow University, said that before Saturday’s by-election the DPP appeared to have the momentum in the political arena, but the latest election results indicate that the situation appears to be largely unchanged. The latest poll show a relatively high level of support for the DPP, said Hsu, but that could easily soften depending on what kind of candidates the party fields next year. He added that if Su Tseng-chang’s daughter wants to take part in an election, she should bear in mind the spotty performance of the KMT’s “princelings” (Sean Lien in Taipei, Eric Chu in New Taipei City and John Wu in Taoyuan) in last year’s elections.

Chou seconded Hsu’s thinking regarding the “princeling phenomenon" in Taiwan politics. He noted that the next generation of the DPP has already tested the waters in city council elections and now appears set to participate in legislative contests. If these "second-generation politicians" hope to be successful in future elections, he cautioned, they must closely study what happened to Sean Lien in his disastrous run for mayor of Taipei.

Chou added that the latest poll shows a third force is slowly beginning to make itself felt in Taiwan politics. 14.5% of respondents showed support for non-party candidates, including strong support at 30.6% in the 20-29 age bracket and 20.8% among those 30 to 39 years old – higher than the levels of support of 18.3% and 13.5% shown for the KMT in those two age groups.

The biggest eye-opener, said Chou, is among 20-29 year olds, where the level of support for non-party candidates was 30.6%, higher than their support for candidates from the DPP at 25.3% and the KMT at 18.3%. He added that if the poll were tailored to probe support for a more concrete entity such as a "third force" in Taiwan politics it could show even greater support than that shown for more abstract "non-party" candidates.

The poll showed that 37.6% of respondents would support the DPP candidate in the 2016 presidential election while 20.8% said they would support the KMT candidate. This is a significant improvement for the DPP compared to last year when a poll following the 9-in-1 election placed support for a DPP candidate at 20.6% and for a KMT candidate at 13.8%. Another significant find is that 75.6% of those polled said they believe there will be a change in the ruling party next year.

The poll also revealed that 38.9% of those surveyed would like to see Eric Chu as the KMT candidate in the 2016 presidential election, with Wang Jin-pyng close behind at 35%. Among survey respondents who identified themselves as pro-Green, Wang was favored by 47.8% while Chu was preferred by 31%. Among respondents with no party preference, Chu and Wang were neck and neck at 29.6% and 29.4% respectively.

Asked who they would support as the KMT candidate if Chu chooses not to run for president in 2016, Wang Jin-pyng was favored by 53.6% by all respondents, much higher than the 10.8% shown for Vice-president Wu Den-yih and the 16.7% for former Taipei Mayor Hau Lung-bin.

In other topics, 63.4% expressed support for combining the elections for President and the Legislative Yuan next year. Asked whether they are concerned that consolidating the two elections would leave a gap between the end of Ma Ying-jeou’s second term and the start of the next president, 59.9% said it does not worry them.

The Taiwan Think Tank poll was conducted on February 8 and included 1068 effective samples with a confidence level of 95% and a sampling error of plus or minus 3 percentage points.