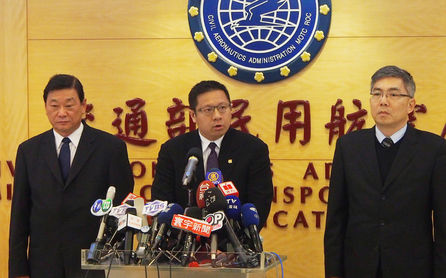 TransAsia Airways held its first briefing for families of victims of Wednesday’s crash of Flight flight GE235. Chairman Liu Chung-hsu of Legend Travel announced on behalf of TransAsia that the company is assisting victims and their families while continuing to search for three passengers who are still missing. Liu also said that the terms of compensation will be disclosed on February 11. Compensation will be made, he said, on the basic principle of "equal compensation for everyone on the plane."

The standard amount for compensation is NT$3 million, he explained, but TransAsia raised that to NT$14.9 million for victims in the crash in Penghu last July. Whether the company will make a similar adjustment this time has not been determined.

Liu noted that TransAsia has already distributed emergency funds of NT$200,000 per victim to 41 recipients including 15 Chinese nationals and 26 Taiwanese. In addition, four Taiwanese families have already received a funeral subsidy of NT$1.2 million each.

Liu told reporters afterwards that relatives of Chinese victims said they had seen in local TV news reports that TransAsia has reportedly made many operational errors and they hoped the company would show responsibility by offering reasonable compensation. He stressed that the company knows that whatever the compensation may be it can never make up for the pain and suffering of the victims' families. He admitted that the payment may not be to the satisfaction of every family, but TransAsia will make its greatest effort to ensure that it is proper.

Several Chinese families had asked for permission to have a victim shipped directly to China without being cremated, said Liu. He noted that the Ministry of Health and Welfare has drafted special instructions to expedite the shipment of victims without embalming beforehand. He said getting the bodies on board is no problem but he cannot guarantee that Chinese authorities will allow them to enter. Liu noted that this involves laws on the two sides, so permission needs to be obtained from both sides before shipping the victims to China.

Liu stressed that the companies will do their best to listen to the opinions and ideas of the families of all the victims in the crash, as well as Yang Jung-tien and two Chinese nationals who are still missing. He pledged that search and rescue efforts will continue until all victims of the crash have been found.

Liu explained that he had held separate briefing sessions with the relatives and friends of victims from Taiwan and China. He noted that the Buddhist ceremony for the seventh day following a person’s death will be held Monday evening from 9 to 11pm. On Tuesday priests from Dharma Drum Mountain and Fo Guang Shan will hold ceremonies for the dead in the morning and afternoon. Then on February 11 the coordination meeting will be held to announce compensation and discuss other related matters with families of the victims.