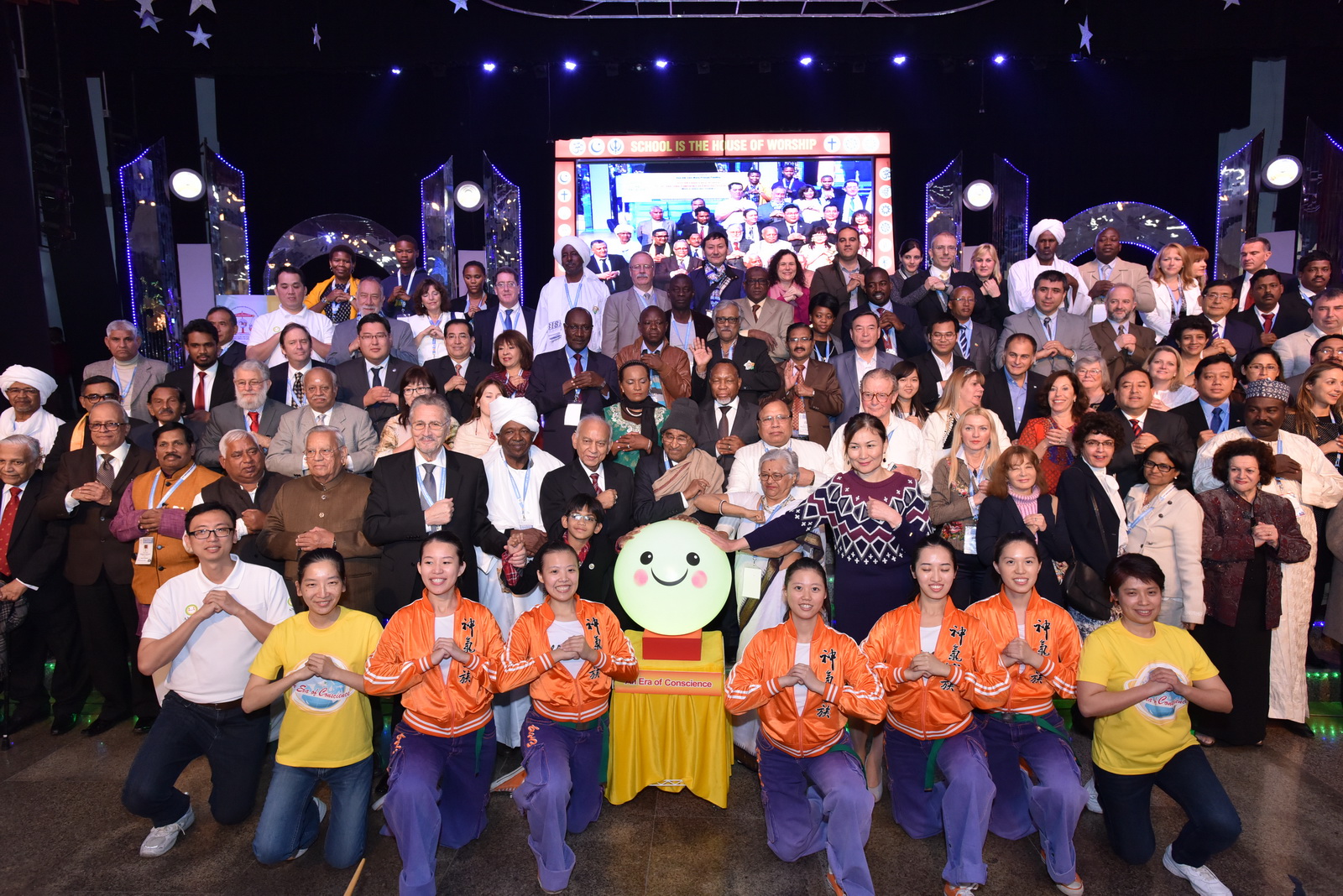 2015 has encountered a rocky start. On January 11th , 1.5 million people gathered to mourn and express their outrage for the deaths of the “Charlie Hebdo” incident at a unity rally that also saw the participation of French President François Hollande and 40 world leaders. People held signs, cartoon boards, and pencils to express their support for freedom of speech and peace, as well as their resistance to terrorism. In a seemingly precarious global climate, how should humanity respond?

“In the face of discrimination brought forth by ignorance, let us exercise respect to treat one another with dignity. In the face of division resulting from hatred, let us be comforted with forgiveness. The wisdom of love and peace is the best weapon to resolve conflicts. Only when conscience is awakened and exercised will we be given the opportunity of a peaceful and harmonious living environment.” These are the words addressed by Dr. Hong on United Nations Day in 2014. Dr. Hong also shared his dissertation, titled “In Support of 2014 UN Day: Rebuilding a Culture of Conscience”, with world leaders, and received warm feedbacks. The Deputy Minister of Foreign Affairs of Republic of Kazakhstan, Alexei Volkov, replied to Dr. Hong’s dissertation on behalf of the President Nursultan Nazarbayev’s office. In the letter, he points out that his country will support the “values and the principles that the Federation of World Peace and Love spreads in helping the world become a better place for future generations.” He further explains that Kazakhstan embraces the goals and virtues in which An Era of Conscience Movement is trying to achieve. He also stresses that Kazakhstan government “is also a strong advocate and initiator of different frameworks within peace building, tolerance, and inter-cultural dialogue.”

The letter discusses the country’s commitment to world peace and disarmament of nuclear weapons. Moreover, the country also hosts a Congress of Leaders of World and Traditional Religions every three years, an indication of its strong involvement in creating a harmonious society. The topic of the 5th Congress this year will be devoted to “the Dialogue of Religious Leaders and Politicians in the Name of Peace and Development”, says the letter.

“Kazakhstan has also been at the vanguard of nuclear disarmament and non-proliferation. One of the first decrees of President Nursultan Nazarbayev of Kazakhstan was a historic decision to close the second largest nuclear test site in the world in Semipalatinsk and to voluntarily give up the world’s fourth largest nuclear arsenal. Kazakhstan has been a model of transforming the benefits or renouncing nuclear weapons into human development. Along with others in the region, Kazakhstan established Central Asia as a nuclear weapon-free zone, which entered into force in March 2009. Kazakhstan has initiated the development of a Central Asian action plan to strengthen nuclear security, the prevention of nuclear proliferation and nuclear terrorism. At the initiative of Kazakhstan, the General Assembly adopted resolution 64/35, on 2 December 2009, declaring 29 August as the International Day against Nuclear Tests.”

Kazakhstan, a country that covers Central Asia and small part of Europe, is the world’s largest landlocked country. The Semipalatinsk Test Site, the nuclear weapon testing site located in Kazakhstan and used by the Soviet Union, has seen 456 nuclear tests being conducted, severely polluting the environment. In 1991, President Nursultan Nazarbayev signed a decree to close the Semipalatinsk Nuclear Test Site and urge the international communities to sign the newer, more conclusive Nuclear Non-Proliferation Treaty (NNPT).The decommission of the testing site made Kazakhstan a nuclear weapon-free country. “Kazakhstan’s intention is to continue its active participation in fostering world peace, security and development. As we strive to improve our contribution capacity, we are dedicated to participating in enhancing world stability to our best ability when such opportunity presents itself. ” Kazakhstan is currently one of the fastest growing economies in the world and is soon to become a regional power.

An Era of Conscience, co-organized by Federation of World Peace and Love (FOWPAL), United Nations NGO Association of World Citizens (AWC), and Tai Ji Men Qigong Academy since January 1st, 2014 has received widespread responses from people across 188 countries, including more than 40 world leaders, government officials, and United Nations ambassadors responding with letters of support and acknowledgement of the movement. Prominent figures who endorsed this movement includes Nobel Peace Prize winner Muhammad Yunus, President of Latvia, etc. The movement also saw the participation of more than 2700 organizations in promoting this movement. In addition, “The Declaration of An Era of Conscience Movement” has been translated into ten languages. For more information regarding “An Era of Conscience Movement”, please visit www.aneoc.org to endorse and respond.