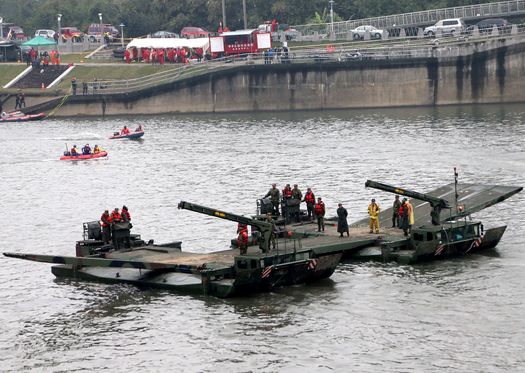 Taipei, Feb. 5 (CNA) The military continued efforts into Thursday night to locate people left unaccounted for in the wake of the TransAsia Airways crash a day earlier that has left at least 31 people dead.
As of 6 p.m., more than 300 service people had joined the search-and-rescue efforts alongside fire fighters and other private groups, the Ministry of National Defense said in a statement.
Two M3 amphibious rigs, 14 inflatable boats and other military vehicles and equipment were working to locate the 12 people still unaccounted for among the 58 who were onboard the flight.
"The military will not give up any opportunity and will continue to send military personnel to assist with the search and rescue work in the hopes of locating those who are still missing," the statement said as rescue operations had been going on for around 32 hours.
As of 4 p.m., 31 were confirmed dead, 12 were unaccounted for and 15 were injured, the Civil Aeronautics Administration said.
The TransAsia ATR 72 turbo-prop plane crashed into the Keelung River in Taipei almost immediately after it took off from Songshan Airport at 10:52 a.m. Wednesday. It was en route to Taiwan-controlled Kinmen, a group of islands just off the coast of China.
The pilot and co-pilot were among the deceased.
The fuselage and other parts of the plane, which broke into three pieces as it crashed into the riverbed, have been pulled out of the river.
An investigation into the cause of the crash is underway. (By Elaine Hou)