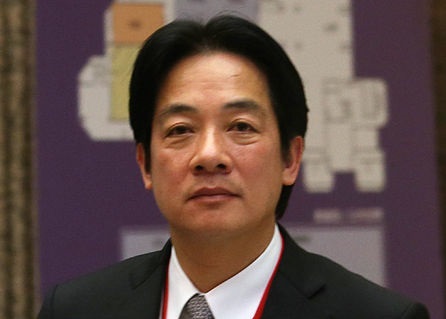 The DPP has announced that it is moving its nomination process for the upcoming presidential primary forward, sparking speculation over whether Tainan City Mayor William Lai will attempt to build on his strong grassroots support and the party’s momentum from the 9-in-1 elections in November and ride the wave into the 2016 presidential elections. One observer says he will have an “important announcement” to make by next Monday, February 9, the launch date of Lai’s new book "Looking into the future – Willam Lai’s New Approach to Government".

Former presidential adviser and founder of the New Taiwan National Policy Think Tank Koo Kuan-min said yesterday that if the DPP can only come up with one viable candidate for its presidential primary it would be a very shameful for the party. It would be like a player in a game also serving as a referee, he said. Koo took a dig at Tsai for her visit to the US during the 2012 election campaign, saying that when reporters asked questions her responses were mumbled and vague. As a result the US finally threw its support to President Ma Ying-jeou in the campaign. "If you can’t even speak English,” asked Koo, “how can you say you have an international outlook?"

Koo said he would meet with Lai soon and should be able to tell everyone whether the Tainan Mayor will participate in the DPP primary by Monday at the latest..

Lin Chih-tsung, convener of the DPP caucus at the Tainan City Council, Secretary Chen Chin-chung and Secretary General Liu Cheng-chang held a joint press conference Wednesday to show their support for Lai in next year’s presidential election. They said 2016 is the right time for Lai to make a move, cautioning that "if he puts it off for eight years, Young William Lai could become Old William Lai."

Lai responded to the show of support by pointing out that he has said before that other people are better suited in terms of their ability, vision, determination and courage. He added that he did not know whether he will meet DPP chair during the Chinese New Year, saying, “The Chairman has her own arrangements."