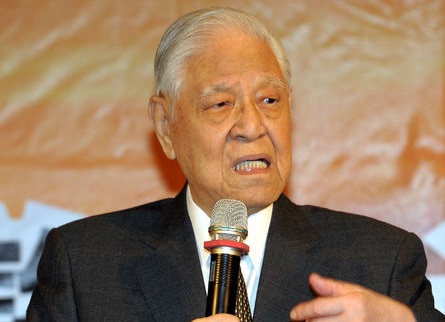 Taipei, Feb. 2 (CNA) Former President Lee Teng-hui 李登輝 said Monday that he will invite the heads of Taiwan's two major parties for a meeting on how to change the process used to amend the country's Constitution.
Lee said he knew both Kuomintang (KMT) Chairman Eric Chu and Democratic Progressive Party (DPP) Chairwoman Tsai Ing-wen well, and felt they should discuss a timetable for constitutional reform.
"The most important thing in the first stage will be to address the high threshold needed to amend the Constitution and the Referendum Act. Otherwise, the people cannot express their views," the former president said during a speech on constitutional reform.
The 92-year-old Lee stood up for the entire speech, giving at the Legislative Yuan in Taiwanese at the invitation of journalists covering legilative news.
Aides to Lee said the former president believes the best time for leaders across the political spectrum to discuss constitutional reform will be after the Lunar New Year, which falls on Feb. 19.
Lee said he will try to bring Chu and Tsai together to sit down and promise to amend the high threshold needed to amend the Constitution and hold a referendum on the matter in conjunction with the presidential election in 2016.
According to the additional articles of the Constitution of the Republic of China, an amendment to the Constitution shall be initiated by a proposal of one-fourth of the total members of the Legislative Yuan.
The measure then has to be passed by at least three-fourths of the members present at a meeting attended by at least three-fourths of the total members of the Legislative Yuan.
The final step is a national referendum, in which the number of votes backing the constitutional amendment must exceed one-half of the total number of eligible voters, considered to be a very high threshold. No referendum of this kind has ever been held in Taiwan.
Lee also advocated changing the high threshold of the Referendum Act which currently requires that 50 percent of all eligible voters cast ballots for a referendum vote to be valid. If the threshold is met, the initiative is decided based on a majority vote.
Taiwan has held six referendums under the Referendum Act since it was passed in 2003, but they all failed to meet the turnout threshold. (By Wen Kuei-hsiang and Lilian Wu)