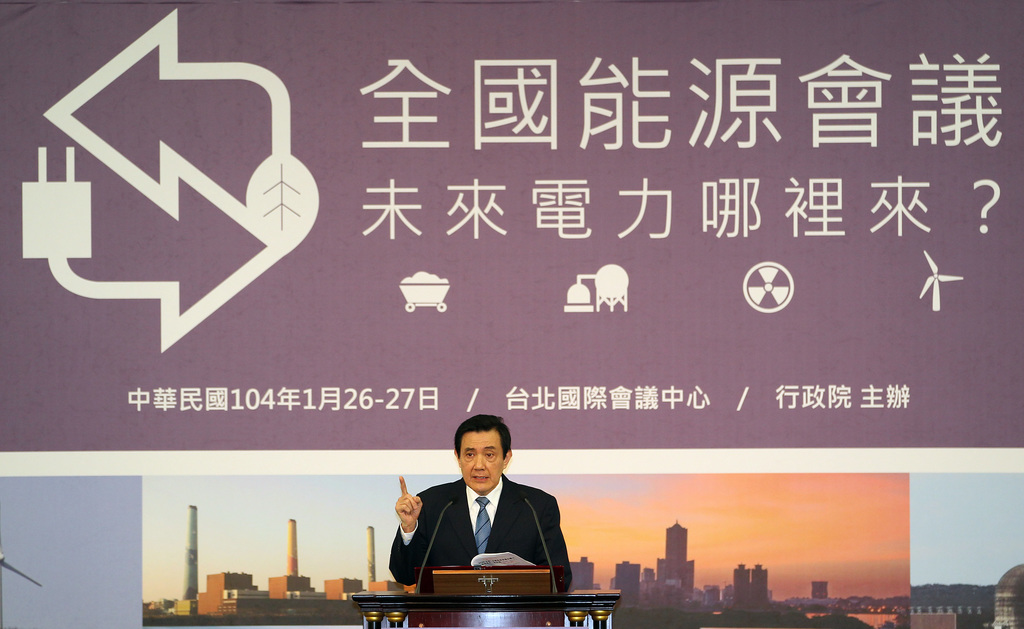 President Ma Ying-jeou and Premier Mao Chih-kuo both spoke at the opening session of the National Energy Conference Monday. President Ma noted that 98 percent of the energy consumed in Taiwan relies on imported energy. At the same time, there are also a number of independent power sources which are too valuable to be overlooked. Ma said the government and people must develop a mix of energy options that will meet five key conditions: energy that is adequate, economical, reliable, sustainable and clean. This is a huge challenge, he said, and one that everyone must face head on.

The National Energy Conference is a two-day event that grew out of a pledge President Ma made as he announced the mothballing of the Fourth Nuclear Power Plant on April 27, 2014. The conference is designed to ensure the people that they need not worry Taiwan will be short on energy in the future. The event, held after eight months of preliminary work, is taking place Monday and Tuesday at the Taipei International Convention Center.

President Ma said the nation must act to see that industries and consumers have ample supplies of electric power at reasonable prices while meeting international commitments on carbon reduction. Nuclear plants must be safe and reliable even as the nation seeks to wean itself from a dependence on nuclear power and move toward a low-carbon environment and green energy. The ultimate goal, he added, is for a nuclear-free homeland.

Ma noted that the Fourth Nuclear Power Plant remains sealed, and meanwhile many issues need to be resolved so the nation will have flexibility and elasticity in its energy supply. This will give the next generation a chance to develop new sources of energy.

Ma stressed that Taiwan is an independent closed system, adding that dependence on imports for energy means that it cannot lightly regard or discard any energy options.

The government is working to promote renewable energy, he said, and there is a lot of potential in these areas. Unfortunately many forms of renewable energy are dependent on the weather, and the current cost of technology puts some constraints on the usefulness of such energy sources. The nation must strive to make up for power shortfalls that will result as nuclear power plants go offline in the future, said Ma, and the next few years will be critical in determining whether Taiwan will face any brownouts.

As Ma was speaking DPP Legislators Chen Ou-po and Tian Chiu-chin suddenly stood up in the audience and held up a banner proclaiming, "With energy conservation and green energy, nuclear power will not be needed." After finishing his speech, Ma passed in front of the two and exchanged pleasantries before he left the venue.

As Ma left, anti-nuclear activists in the audience yelled, "Stop building nuclear power plants", only to be answered by shouts of "Legislators and anti-nuclear groups should not lie to brainwash the people."

Premier Mao Chih-kuo also commented on the importance of developing a suitable mix of energy options. Mao compared the range of viable energy sources to a "buffet" or smorgasbord, saying that people should be able to choose from many options and enjoy a mix of energy that is ample and satisfying as well as reasonably priced.

Mao noted that Taiwan’s energy choices are relatively limited at the moment. Part of the problem, he noted, is that once a decision on energy is made it it difficult to reverse. Often it may take ten years or even a generation to judge whether a decision was correct. When shortages develop, he said, it is not like a computer game where you just click on reset to return to an earlier status. It may take another whole generation to make up for a mistaken decision.

Mao noted that options in energy are limited and there is no one perfect solution. He said the best approach is to select a combination of options; after that, you must be ready to accept the consequences of your decision and bear whatever costs may result. Mao emphasized that energy policy choices have complex and far-reaching implications, and they can only be made following careful and deliberate discussion.

Outside the convention center where the energy conference was taking place, a group of activists demanded the government find alternatives to a proposal to store nuclear wastes near Nan-ao in Ilan County. Hundreds of protestors, some decked out in protective gear, waved signs and chanted slogans expressing their firm opposition to any plan to dispose of nuclear waste in Ilan. Many said they will fight to the death to prevent any such move by the government.

The National Nuclear Waste Action Platform made five demands in a press conference. They expressed their opposition to extension of the operating licenses for nuclear power plants one, two and three and urged the government to implement "forward-looking energy-saving goals" including energy tax legislation, carbon reduction targets, cancellation of industrial energy subsidies and accelerated development of green energy sources.

Tsui Shu-hsin, Secretary-general of the Green Citizens Action Alliance, criticized the National Energy Conference for failing to incorporate the views of local residents regarding the risks of nuclear power. She said the whole event was designed to look open and transparent, while in reality the government’s attitude is more like a ‘black box’ of internal operations and decision making in which the people are largely excluded. She said the government must wake up to the consensus in society and promote realistic energy policies that will be to the benefit of all.