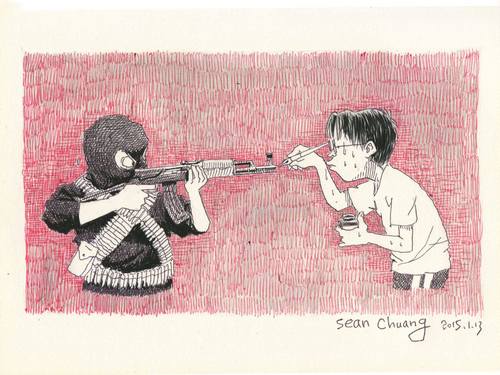 Taiwanese comic artists have put their pens to paper to show support for Charlie Hebdo ahead of a trip to France to attend the annual Angoulême International Comics Festival.

Three of the seven Taiwanese comic artists who are scheduled to participate in the festival -- Sean Chuang, Chang Sheng and Iron-- have posted cartoons in support of the satirical Paris paper that was attacked on January 7.

The posts can be seen on the Facebook page of the Taiwan pavilion (https://zh-tw.facebook.com/taiwan.angouleme).

"As an artist, I was very sad about what happened, so I created this cartoon for the comic artists who died," Chang Sheng told CNA last Wednesday.

His work depicts a terrorist with an assault rifle falling backward into a forest of upended dip pens, which he said is intended to show that murderers face a hell of suffering at the tip of a pen.

"I don't care which religion you follow, it is wrong to kill people," the award-winning artist said.

"Poking people with a pencil and killing people with an AK-47 are not the same," he said, adding that there is an anti-war message as well and violence does not solve the world's problems.

Chuang, on the other hand, showed a much more reserved approach in his cartoons.

His two works to show unity with the slain comic artists are intended to show that neither pens nor guns should be used to hurt people, he said.

"Sometimes pens can also become weapons and the hurt they can cause is not necessarily less than a gun," he explained.

The three artists, along with Li Lung-chieh, Kiya Chang, Ah Tui and Chen Pei-hsiu, will attend France's largest comic book festival from Jan. 29 to Feb. 1 to promote their works in Europe and meet local readers.

The Taiwan pavilion will feature over 300 publications from around two dozen publishers.