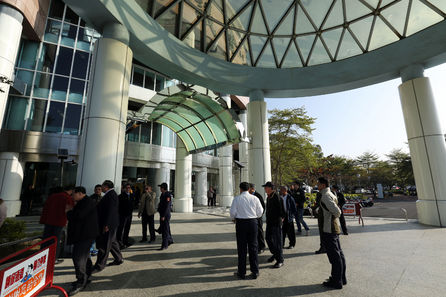 Tainan Mayor William Lai said Monday that he fully supports investigations into wrongdoing among members of the Tainan City Council. Lai said that prosecutors should pursue all evidence of illegal activities regardless of what party may be involved, saying that those to break the law should be rooted out so that local politics can be clean.

A handful of campaign workers for Lee Chuan-chiao, a KMT member and speaker of the Tainan City Council, are being investigated on suspicion of vote-buying in the November 29 election last year. Huang Cheng-ching, who served as Director-General of Lee’s campaign, is the target of agents from the Tainan District Prosecutors Office (TNDPO) on charges of vote buying.

Huang and four other campaign aides are suspected of offering some NT$300,000 in bribes for votes in the election, allegedly handing over funds to a borough chief surnamed Li for distribution at NT$5000 to 6000 per household. Six other campaign workers have also been called in for questioning in the case.

In an unrelated incident, Deputy Speaker Kuo Hsin-liang faces charges that he attempted to coerce a bribe from the honorary chairman of Quintain Steel in exchange for expediting an environmental impact statement (EIA) for the company’s handling of waste products from steel production. Kuo reportedly met the chairman in August 2011 and asked for NT$12 million in return for his assistance in obtaining an EIA favorable to Quintain. The deal fell through when the EIA turned out to be largely negative, however, and Quintain stopped payments to Kuo.

Prosecutors say that Kuo had set up an arrangement with the steel company in which he received smaller payments on a regular basis in order to make it look like they were repayment of a loan. Kuo denies any wrongdoing in the case, but prosecutors are proceeding with their investigation of the deputy speaker on charges of violating the Corruption Offenses Act.

The charges against Lee and Kuo come on top of controversies over the election for City Council Speaker earlier this month, which KMT member Lee won despite the fact that DPP members hold a majority of seats in the council. A flurry of charges and counter-charges arose out of the election, with some hinting that votes may have been bought with funds from sources in China. Mayor Lai refused to attend the opening meeting of the council, and the DPP reacted by expelling five city council members from the party.

Mayor Lai railed against the speaker and deputy speaker on Monday, stressing that he is fully in favor of investigating illegal activities by members of the City Council, whether they be from the KMT or the DPP or any other party. Lai has said before that Tainan stands out as a “Mecca” for democracy in Taiwan, something that local residents have always been proud of, but now warns that the recent scandals are tainting that reputation, and the problems must be addressed and resolved as quickly as possible.