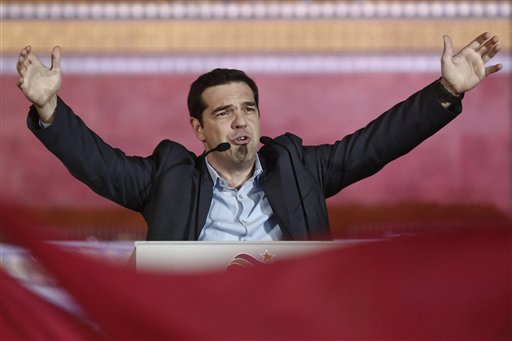 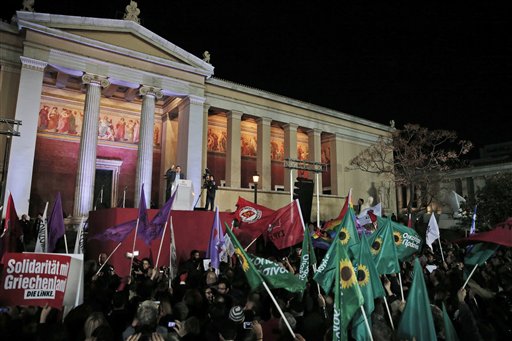 ATHENS, Greece (AP) — A radical left-wing party vowing to end Greece's painful austerity program won a historic victory in Sunday's parliamentary elections, setting up a showdown with the country's international creditors that could shake the eurozone.

Alexis Tsipras, leader of the communist-rooted Syriza party, immediately promised to end the "five years of humiliation and pain" that Greece has endured since an international bailout saved it from bankruptcy in 2010.

It remained to be seen whether Syriza had enough seats to govern outright or would have to seek support from other parties. That might not become clear until Monday morning or later, when all the votes are counted.

If Tsipras, 40, can put together a government, he will be Greece's youngest prime minister in 150 years, while Syriza would be the first radical left party to ever govern the country.

The prospect of an anti-bailout government coming to power in Greece has sent jitters through the financial world, reviving fears of a Greek bankruptcy that could reverberate across the eurozone.

"The verdict of the Greek people ends, beyond any doubt, the vicious circle of austerity in our country," Tsipras told a crowd of rapturous flag-waving supporters.

He won on promises to demand debt forgiveness and renegotiate the terms of Greece's 240 billion euro ($270 billion) bailout, which has kept the debt-ridden country afloat since mid-2010.

To qualify for the cash, Greece has had to impose deep and bitterly resented cuts in public spending, wages and pensions, along with public sector layoffs and repeated tax increases.

Its progress in reforms is reviewed by inspectors from the International Monetary Fund, European Commission and European Central Bank, collectively known as the troika, before each installment of bailout funds can be released.

Tsipras pronounced the troika and its regular debt inspections "a thing of the past."

In Germany, Bundesbank President Jens Weidmann told ARD network that he hoped "the new Greek government will not make promises it cannot keep and the country cannot afford."

The election results will be the main topic at Monday's meeting of eurozone finance ministers. Belgium's minister, Johan Van Overtveldt, said there is room for some flexibility, but not much.

"We can talk modalities, we can talk debt restructuring, but the cornerstone that Greece must respect the rules of monetary union — that must stay as it is," Van Overtveldt told VRT network.

JPMorgan analyst David Mackie said negotiations between the new government in Athens and creditors "are likely to be very difficult" but cannot drag on indefinitely.

"If Greece is unable to honor its obligations this year, then economic, financial and banking stress is likely to lead either to an agreement, or to a second round of elections, or to an EMU exit," he said, referring to Greece's membership in the eurozone.

But Re-Define think tank analyst Sony Kapoor said that while Greece has failed the eurozone and EU authorities, they have also failed Greece.

"The Greek rescue package was financially unsustainable, economically wrong-headed, politically tone-deaf and socially callous," he said. "Syriza deserves a chance, and their victory will force the EU to confront the elephant in the room: unpayable debt and bad policy decisions."

He noted that Syriza's moderation of its rhetoric before the election "is promising, making it likely that it will govern closer to the center than many think."

Samaras conceded defeat, saying he had received a country "on the brink of disaster" when he took over in 2012 and was close to ushering it out of the crisis.

"I was asked to hold live coals in my hands and I did," he said. "Most gave us no prospect of lasting out and we did. We got the country out of deficits and recession ... and set the foundations for growth and a final exit from the crisis."

Syriza's anti-bailout rhetoric appealed to many in a country that, in the past five years, has seen a quarter of its economy wiped out, unemployment above 25 percent and average income losses of at least 30 percent.

But Syriza's victory has renewed doubts over Greece's ability to emerge from the crisis, and generated fears that the country's finances could once again send shockwaves through global markets and undermine the euro, the currency shared by 19 European countries.

The centrist Potami party was battling for third place with the Nazi-inspired Golden Dawn, whose leader and several lawmakers campaigned from prison, where they are awaiting trial on charges of participating in a criminal organization.

If Syriza falls shy of the 151 seats necessary to form a government on its own in the 300-seat parliament, it will have to seek support from other parties — either in a minority government or as part of a coalition. The latest count early Monday gave it 149 seats, but electoral officials said the number will depend on final results.

Raf Casert in Brussels and Derek Gatopoulos in Athens contributed.