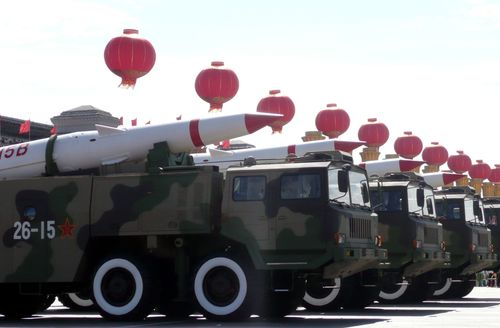 Taipei, Jan. 25 (CNA) China plans to hold a grand military parade in September as part of celebrations to mark the 70th anniversary of the victory in the Sino-Japanese War 1937-1945, according to a Hong Kong newspaper.
China's President Xi Jinping will review the country's troops for the first time since taking office in March 2013, the report in the Saturday edition of the Sing Tao Daily said.
Also for the first time, Beijing plans to invite foreign heads of state to attend the celebrations, the report said. It is not yet known, however, which military forces will be involved, what state-of-the-art weapons will be displayed, or who will be on the guest list, the paper said.
Citing Macau-based senior researcher Huang Dong who chairs the Macau Military Institute, the report said the military parade is unusual because such an event is normally held only on certain anniversaries of the People's Republic of China's founding.
The last such parade was in 2009, when China celebrated the PRC's 60th founding anniversary, and then-President Hu Jintao reviewed troops.
The parade this year may be held on Sept. 3, when China marks the victory in the Sino-Japanese War, the Hong Kong Economic Journal reported. (By Elizabeth Hsu)