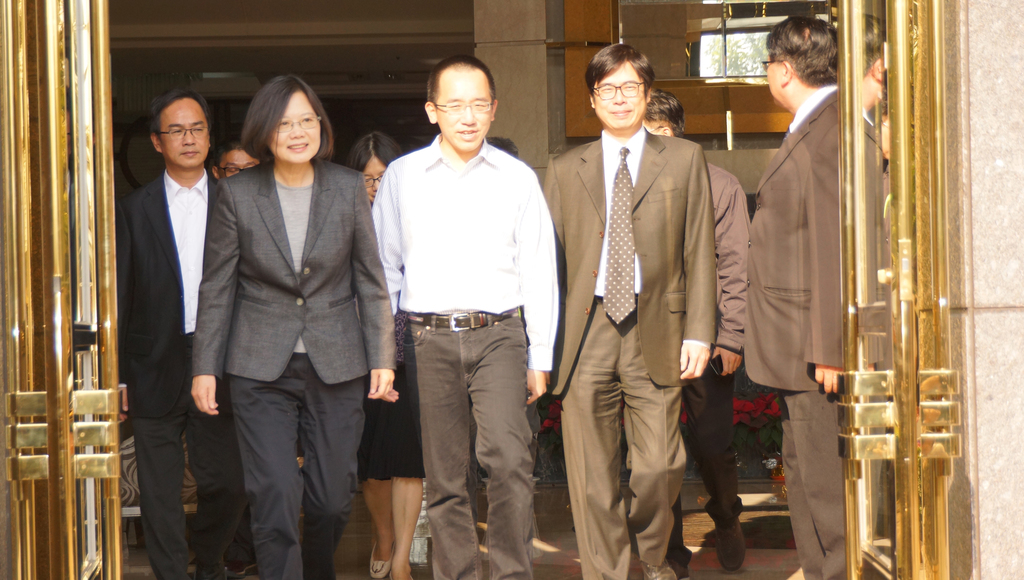 DPP Chairman Tsai Ing-wen and a group of party members paid a short visit to former President Chen Shui-bian in Kaohsiung on the 20th day of his initial month-long medical parole. The group chatted briefly with Chen and his family members, expressing their best wishes and checking on his progress while recuperating in a home environment

Tsai was accompanied by legislators Chen Chi-mai, Kuan Bi-ling, Lee Kun-tse, Hsu Chih-chieh and others in making the trip south. They were greeted by the former president’s son Chen Chih-chung at the door downstairs and escorted up to the family residence, where they spent about 45 minutes talking with A-bian and family members.

Chen has been visited by several groups since he was granted a medical parole on January 5. DPP Secretary-General Joseph Wu went to Kaohsiung January 5 to express the concern of party members. He was followed January 13 by Tainan City Mayor William Lai, who brought along cakes and bowls of fish soup.

Tsai left without meeting reporters after the visit, but Kuan Bi-ling commented briefly on what had transpired. She said Chen was looking better and in a good mood, especially with his grandchildren around so that he can interact with them. She said the home environment is obviously good therapy for Chen.

Kuan noted however that Chen’s problems with incontinence and degenerative brain disease do not seem to have improved. She said many of the symptoms Chen has shown will require a long period of convalescence and cannot be addressed in prison.

Kuan noted that Chen Chih-chung thanked Tsai and the group for coming to see his father. He noted that Chen’s medical parole expires next month, and next week he will be transported north to Taichung Prison for an examination and an evaluation of his condition at the one-month mark. After that a medical team will make a decision as to whether the medical parole should be extended. He said the decision will be in the hands of the medical team, and it is pointless for the family or anyone else to worry at this point.

There had been speculation that Tsai or other members of the group might discuss Chen Chih-chung’s statements that he would like to re-join the DPP if possible, and they did not touch on any other political issues.