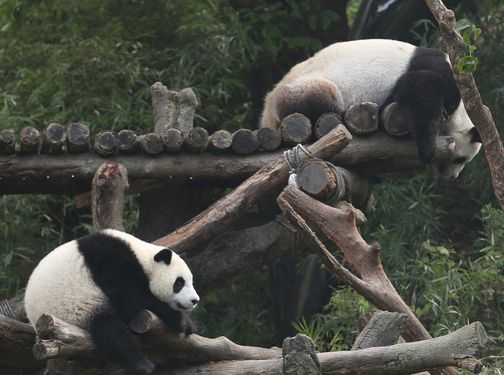 Taipei, Jan. 25 (CNA) Taipei Zoo's giant panda, Yuan Zai, along with her keeper, won the Giant Panda Zoo Awards on Sunday, which is an online prize dedicated to panda conservation.
Defending champion Yuan Zai received the "Panda Personality of 2014" after being chosen over Bao Bao from the Smithsonian's National Zoo in Washington, Ju Xiao from Chimelong Safari Park in Guangzhou, Lin Hui from Chiang Mai Zoo and Mei Lan from the Chengdu Field Research Centre for Giant Pandas.
The 18-month-old panda was voted 2013's "Panda Personality" winner, as well.
Additionally, Chen Yu-yen, director of the Panda House, won third place in the category of "Human Panda Personality of 2014."
The gold and silver awards went to Shen Fujun and Wang Chengdong, both from China.
According to Belgian panda enthusiast Jeroen Jacobs, who established the prize in 2012, 258,490 votes were cast during the one-month online voting in 10 categories.
The top three countries contributing votes were China, the United States and Taiwan, he said.
The now 50-kilogram Yuan Zai has been wildly popular since her birth at the Taipei Zoo in July 2013 to Tuan Tuan and Yuan Yuan, a pair of giant pandas given to Taiwan by China five years ago. (By Lee Hsin-Yin)