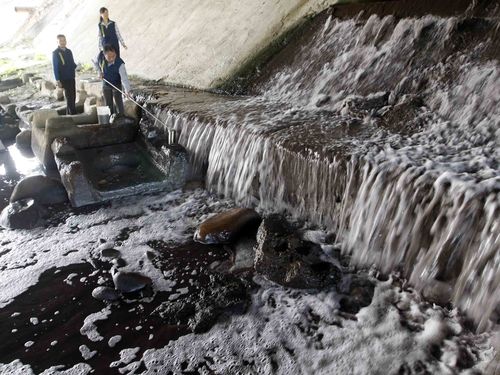 Taipei, Jan. 22 (CNA) The Legislature approved amendments to the Water Pollution Control Act Thursday under which business owners convicted of causing death by illegally releasing toxic water or waste water could be given life sentences plus a fine of NT$30 million (US$1 million). The amendments include provisions to protect whistleblowers, stop businesses from transferring properties, and tracing culprit-owned properties to a third party to ensure that convicted polluters do not escape justice.
The toughened law comes after public outcry over the small fine -- just NT$600,000 -- slapped on Advanced Semiconductor Engineering, Inc. in 2013 when the massive company was found to be dumping untreated waste water into a river in Kaohsiung.
Prior to the amendments, polluters were only liable for a maximum sentence of three years plus a fine of between NT$200,00 and NT$1 million.
The revisions up maximum punishments for waste water discharge that causes illness or disease to seven years in prison plus a fine of NT$20 million.
If the pollution causes "severe injuries," the convicted party now faces 3-10 years behind bars plus a fine of NT$25 million.
While polluters whose actions cause death could face seven years- to-life and NT$30 million fine, agents or employees found responsible for assisting in the dumping of those pollutants will face fines 10 times that for their bosses -- at NT$300 million.
Legislators made it a point that perpetrators must not profit from polluting the environment and harming people, adding a provision to the act to pay victims with illicit gains or otherwise have those profits confiscated.
The amendment also authorizes authorities to track down convicts' properties even if registered under a third party.
The Environmental Protection Administration under the Executive Yuan is charged with assessing and calculating the payout for each victim.
Whistleblowers in such cases are protected under the new amendments so that employers cannot lay them off, demote them or cut their pay.
To encourage employees to expose illegal activity by their employers, responsible government agencies will now also be required to set aside a budget for cash rewards given to whistleblowers.
The last major addition to the amended law is that confiscated profits and part of the fines levied on violators must go to a water pollution control fund, which allows the general public to join the campaign to monitor possible violations. (By Tseng Ying-yu and S.C. Chang)