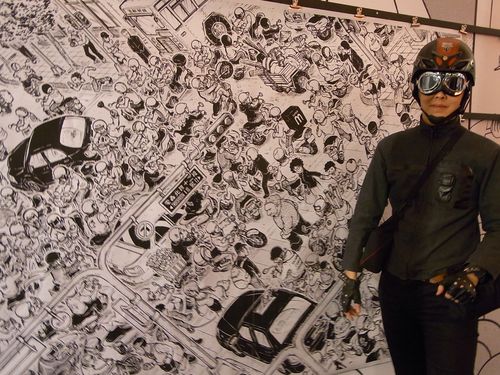 The seven artists at the Angoulême International Comics Festival next week will be Chang Sheng, Li Lung-chieh , Kiya Chang, Iron, Sean Chuang, Ah Tui and Chen Pei-hsiu, according to Taiwan's Ministry of Culture.

A Taiwan pavilion at Europe's second-largest comics showcase will feature over 300 publications from around two dozen publishers, headlined with the catchphrase "The Strangers in Formosa" to show the diversity of culture in Taiwan, Aho Huang , curator of the pavilion and editor-in-chief of Dala Publishing Co., said Wednesday.

Six of the artists to attend have created short comics inspired by the prompt "people from another land" to be displayed at the pavilion, he said.

The works include two sci-fi comics that explore humanity's curiosity toward foreign lands; two comics that recreate historic battles; a comic about the story of a Scottish tea vendor in Taiwan; and one about a Frenchman who spends a Lunar New Year with his wife's family in rural Taiwan.

Chang Sheng, an award-winning artist, said his sci-fi comic about shooting a paper airplane into space was inspired by his musings on what it would take to keep a paper plane in the air.

He said the work focuses on human beings leaving behind their homeland to explore.

"The paper plane represents that hope and dream," he said.

Chang and the other Taiwanese artists at the French festival will draw up works on site, sign autographs and participate in forums and other activities, Taiwan's ministry said.

"We hope the international community will gain a better understanding of Taiwan through the artists," said Chu Jui-hao , deputy head of the ministry's Department of Humanities and Publications.

The Angoulême International Comics Festival, which attracts hundreds of thousands of visitors each year, will take place from Jan. 29 to Feb. 1.