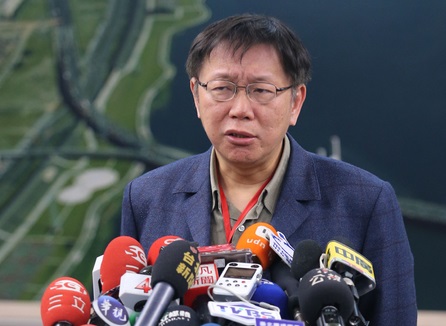 Former Taipei Mayor Hau Lung-bin spoke out Monday after Ko Wen-je labeled the city’s contract with the Farglory Group to construct the Taipei Giant Egg arena ‘ridiculous.’ Ko complained that the agreement left the municipal government with no right to fine Farglory for delays and little leverage otherwise for ironing out problems with the project. Hau denied that the contract left the city with no recourse to deal with delays, saying that it does indeed stipulate that the city can fine Farglory up to NT$50,000 a day for delays in construction. Hau urged Mayor Ko to ‘go back and take a good look at the contract’ before saying anything else about the city’s deal with Farglory.

Ko had said that he and his aides went through the contract again and again but could not find any clauses that would allow the government to hold Farglory accountable in case of delays in the project.

Hau noted that the Giant Egg was designed to save the cost of hosting the Taipei World Olympiade 2017 and featured a large dome which can be opened and closed depending on weather conditions. Progress on the project has been slowed by controversies such as an underground pedestrian walkway to disperse crowds after big events or in emergencies. Farglory’s plans included uprooting trees along Guangfu South Road to facilitate excavation and construction, but they have been stymied by protestors who brought attention to the project’s EIA and have prevented workmen from removing the trees.

City officials are now saying that the BOT contract with Farglory states that if Farglory is remiss in carrying out the provisions of the deal, the Taipei City Government can impose daily fines of up to NT$50,000. In case of a serious breach of contract, the city is empowered to terminate the contract unilaterally.

The contract lays out a total of eight circumstances under which Farglory would be considered in breach of the contract, including the "promotion of private participation in a public construction project, serious delays in the construction schedule, major negligence regarding construction quality on the project, mismanagement and other serious problems. In such cases the city has the right to terminate the contract and deduct any losses accrued due to the contract violations from the deposit tendered by Farglory in signing the contract.

Various Taipei mayors have had different attitudes toward the Giant Egg project in the past, and Farglory chairman Chao Teng-hsiung showed recently that he is losing his patience over the quibbling. Chao stated publicly that the Giant Egg is too important to future development of Taipei and its national sport of baseball to yield to groups opposed to the removal of a few trees. He noted that the group’s plans were designed specifically to minimize the impact on existing trees and added that new ones will be planted later in process of construction. He asked incredulously, "Are people really not as important as trees?"

Farglory Vice president Tsai Tsung-yi also protested Ko’s statements, asking, "If this contract was really that attractive and offered such good terms, why weren’t there more competitors in the bidding?"

Tsai said he and Chao and other officials of Farglory hope to meet Ko Wen-je as soon as possible to clear up misunderstandings between the group and the city so that construction can continue on the project.

Tsai pointed out that the principles involved in BOT construction projects call for the government to do its part as well as the contractor. He said the two sides should work together to create a win-win situation so that the project can be completed as soon as possible, rather than taking digs at each other and arguing about fines and punishment.

Taipei City advisor Hung- Chih-kun is one person who has ‘taken a good look at the contract’ between the city and Farglory. He points out that there are a number of differences between the current version of the contract and the original that was signed in 2003 when then-Taipei Mayor Ma Ying-jeou first announced the project.

Hung says that while there are provisions for fining Farglory for construction delays, the city is powerless to impose a penalty at this point because the previous administration already accepted the group’s explanations for the delays.

In addition, the maximum daily fine possible for violations such as delays has been lowered from the original NT$100,000 a day to NT$50,000 and the maximum that can be deducted from the performance bond has been reduced from 30 one-thousandths to ten one-thousandths of the value of the bond. Farglory’s bond for this project was NT$300 million so the maximum that the city could claim for delays would be NT$3 million – a mere drop in the bucket in a project this size.

Hung suggests that both Ko and Hau should take another good look at the contract with Farglory, or contracts as it may be, and give the public a chance to take a look at them as well.