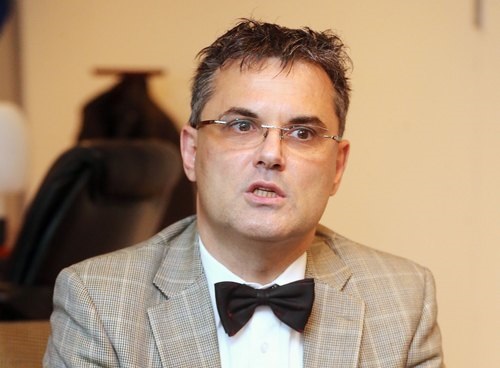 Taipei, Jan. 12 (CNA) France's representative in Taiwan said Monday that Taiwan is a safe place and that French nationals in Taiwan need not worry about their safety in the wake of terrorist attacks in their home country, which claimed 17 lives last week.
Olivier Richard, director of the Bureau Francais de Taipei, told the media here that his office kept in close touch with Taiwan's police after Charlie Hebdo magazine staff were attacked and killed on Jan. 7.
The world, including Taiwan, was shocked by the most severe terrorist attacks in France in nearly 50 years, Richard said. Last week, French nationals were joined by Taiwanese in Taipei and Kaohsiung in denouncing terrorism, and a huge march for freedom took place in Paris on Sunday.
The latest terrorist rampage did not just hurt France, it also destroyed such universal values as respect for others, freedom of expression, respect for races and democracy, Richard said. When his home country came under attack, he said he had to follow the rules in contacting Taiwan's police authorities. But because Taiwan is a safe place, his office did not issue an alert for French expats here.
"We feel quite relaxed in Taiwan and are not worried," he said. "Besides, the incident is over. France is returning to normal, and I would urge people trying to visit my country not to worry about travel safety."
The French office on Monday began welcoming people to show support for victims of the attack by signing a book of condolences, which diplomatic envoys from Israel, Austria and Britain in Taiwan signed ahead of others.
Officials from Taiwan's Ministry of Foreign Affairs, including Foreign Minister David Lin, have also expressed their condolences for the victims. (By Tang Pei-chun and S.C. Chang)