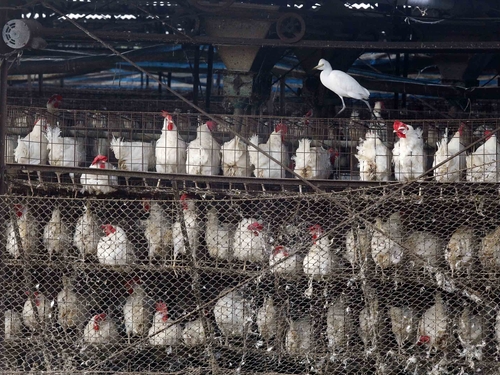 The Council of Agriculture (COA) said Monday that it has expanded its focus on poultry farms to include Changhwa County in a continuing outbreak of avian flu in southern Taiwan. That brings the number of affected counties to five including the previously-disclosed Pingtung, Tainan, Yunlin and Chiayi counties, with the COA noting that it has conducted tests on samples from 38 poultry farms with some 141,500 birds to date.

The COA has indicated that migrating fowl are the most likely source of the disease, which has been confirmed in four goose farms in Yunlin County and a duck farm in Pingtung County as H5N2 avian flu while samples from a goose farm in Chiayi County show similarities to the H5N8 avian influenza strain found recently in Korea. In Pingtung County, samples from a chicken farm have been confirmed as having the H5N2 avian flu virus.

To prevent the spread of the viruses, the government has culled 8,500 geese and 7,000 ducks at the affected farms and has imposed a ban on the slaughter of geese and ducks in commercial slaughterhouses for two days. Transportation of birds between different locations has also been outlawed until the current outbreak has been brought under control.

Noting that migrating birds are the most likely source of the virus, the COA has instructed farmers to erect fencing to keep wild birds from mixing with local populations in farm areas. In the face of protests from farmers who say that fencing is impractical, the COA advised them to put up fencing in areas where tube feeding is done in order to keep out stray birds that might be attracted by the food.

Chang Shu-hsien, director of the Bureau of Animal and Plant Health, Inspection and Quarantine (BAPHIQ) explains, "It is difficult for farmers to fence in the birds because of the large expanses of ponds involved, but at least fencing can be carried out in areas surrounding feeding tubes, which may be the source of this wave of the epidemic." Chang also suggested that poultry farmers switch to dry farming methods wherever feasible in raising their birds.

At the same time, disinfection operations for transport vehicles, loading cages, feedlots and other areas where fowl are processed are being stepped up to ensure that the outbreak will not be allowed to spread.

Lai Shiow-suey, an honorary professor at the National Taiwan University College of Veterinary Medicine, warns the government must be very careful in its handling of avian flu outbreaks. She notes that in the past the COA has ruled that culling was not necessary in outbreaks involving low pathogenic strains of avian influenza in poultry. She cautions that failure to cull infected chickens, ducks or geese could lead to subsequent outbreaks which might involve high pathogenic forms of the disease.

The expert in infectious diseases notes that the current wave of bird flu has not developed overnight. She warns that when ducks, geese and chickens begin showing symptoms, the virus may well have been present for three months or longer. The recombinant ability of the virus also means that outbreaks cannot be contained in the span of a few months, and further outbreaks can be even more difficult to control.

Lai also warns that Taiwan now has evidence of three strains of avian influenza virus, including the old and new H5N2 virus as well as the first occurrence of H5N8. Lai says the most likely sources of the virus are South Korea and Jilin Province in China. She says the government must be careful about contact between migratory birds and local populations, and it must also pay attention to the possibility of local virus mutations.

Another problem with infectious outbreaks is that animal farmers might be withholding information from the central government. Lai notes that in the outbreak of the highly pathogenic H5N2 virus at the Tawu egg farm in Pingtung County in December, farmers initially tried to contain the outbreak on their own. In the end, however, they failed and the epidemic quickly expanded, and they were unable to conceal the outbreak any longer. As a result some 120,000 chickens were culled before the epidemic was brought under control.

Lai reiterated that outbreaks are not a matter of a few days, saying that the epidemic in central and southern poultry farms has probably been growing for at least three months.

Lai added that in 1997 Taiwan faced a catastrophic outbreak of foot and mouth disease, noting that the outbreak was reported in nearly three dozen cities and counties at almost the same time. "How could it have happened that everyone was hit by the epidemic on the same day?" she asked. She said the outbreak had been ignored and farmers failed to inform the government of diseased animals.

Lai said that some local veterinarians are reluctant to get involved when epidemics break out and tell farmers not to inform authorities. Some vets say the government is short of funds and will not offer compensation for losses in epidemics. She explained that farmers who notify the government on their own and are forced to cull their animals may be compensated for up to 60 percent of their losses. Those who fail to report outbreaks, however, not only will be ineligible for compensation; they may be subject to penalties ranging from NT$50,000 to 1 million in accordance with current laws.