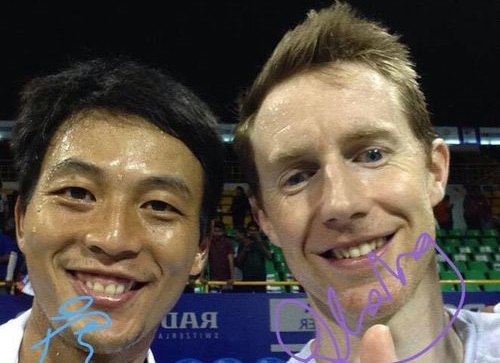 Taiwanese tennis star Lu Yen-hsun and his British partner Jonathan Marray have risen to world No. 1 in the ATP men's doubles rankings following their victory in the Aircel Chennai Open Sunday.

The Lu-Marray duo is sharing the ranking with two other pairs: Juan Monaco of Argentina and Rafael Nadal of Spain; and Jamie Murray of the U.K. and John Peers of Australia.

In the final match of the men's doubles late Sunday, Lu and Marray bested top-seeded Raven Klaasen of South Africa and Leander Paes of India 6-3, 7-6 (7-4) to become champions.

It was Lu's third title match in the Chennai Open. He first won the men's doubles title of the tournament in India in 2005, when he partnered with German Rainer Schuettler.

Lu also competed in the 2015 Chennai Open as a singles player but managed to reach only the quarterfinals.