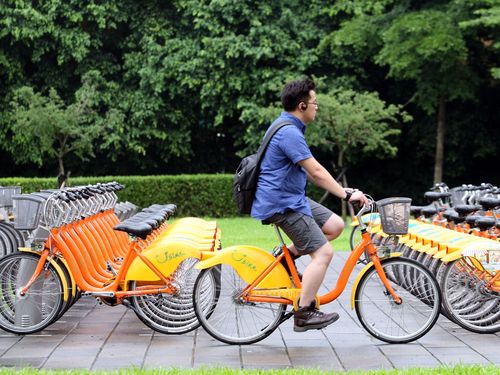 TAIPEI (Taiwan News) – Taipei City Mayor Ko Wen-je said Saturday the discussion on whether or not to continue subsidies for the YouBike system would soon begin.
The city government is paying so consumers can ride the first 30 minutes for free, but officials have said it can no longer afford to pay for everything.
Free is the best solution, but subsidies from the city government cannot continue on and on, Ko told reporters Saturday.
The city’s Department of Transportation was reportedly planning to return to a “the user pays” formula in April or May. Talks with the operator of the YouBike program, bicycle manufacturer Giant, were in progress, media reports said.
If the current system ended, the city might also call in an extra budget or use money from the parking administration to fill up the gaps, transportation commissioner Chung Hui-yu reportedly said.
Ko described the issue as a major problem, adding that city subsidies could be awarded on one occasion but could not be allowed to go on for a long period. He said there would soon be discussions about the fate of the subsidies.
Since taking over on December 25, Ko has rapidly implemented new policies, including the removal of a bus lane which had been unused for eight years, and the announced demolition of 226 illegal structures posing fire and other hazards.
Early Saturday morning, city workers completed the tearing down of a pedestrian overpass next to the Kunyang Mass Rapid Transit Station. Over the past few years, the previous city administration already began razing overpasses and closing pedestrian tunnels in a new policy to favor pedestrians over cars, reports said.
The Kunyang bridge was the latest of several overpasses on Zhongxiao East Road section 5 to have been demolished.