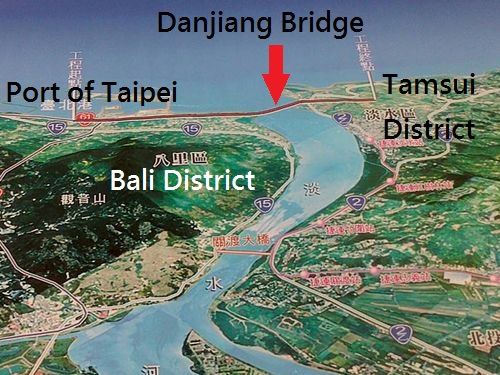 Taipei, Jan. 9 (CNA) The government has launched an international tendering competition to solicit designs for the planned Danjiang Bridge in New Taipei City, the Ministry of Transportation and Communications said Friday.
Following the first competition conference in Hamburg in December, a second one will be held Friday in Tokyo, and a third in San Francisco on Jan. 14, according to the ministry's Directorate General of Highways (DGH).
The submissions will be screened in the first stage in May and the finalists will be announced in August, the DGH said. The government is hoping that the Danjiang Bridge will be a new landmark, on par with the Golden Gate Bridge in California and the Sydney Harbour Bridge in Australia, when it is completed in 2020.
The Danjiang Bridge will span the estuary of the Tamsui River, connecting the city's Tamsui and Bali districts, which are popular tourist destinations famous particularly for the sunset over the Taiwan Strait.
At 6 kilometers long and 44-meters wide, the bridge will later accommodate a light-rail track between Tamsui and Bali. At present, the two districts are linked mainly by the Guandu Bridge, which is located about 10 kilometers upstream.
When the new bridge is completed, the driving distance between Tamsui and Bali will be shortened by 15 kilometers, with travel time reduced by 25 minutes during peak hours, according to New Taipei's transportation department.
Overall, it will improve Tamsui's transportation network and help ease traffic congestion, the department added. (By Wang Shu-fen and Y.F. Low)