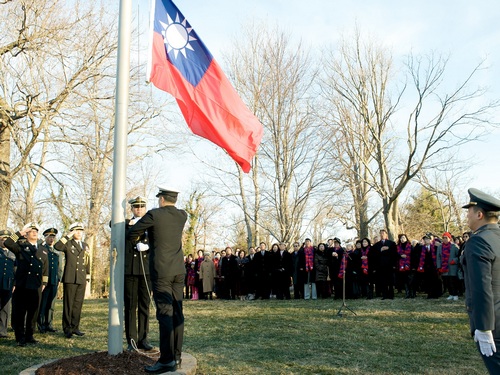 The American Institute in Taiwan (AIT), the de facto US Embassy in Taipei in the absence of formal diplomatic relations, released a strongly-worded statement Thursday regarding Taiwan’s action in holding a flag-raising ceremony January 1 at Twin Oaks, the residence of the de facto ROC representative in Washington.

Mark Zimmer, spokesperson for AIT, echoed the words of US State Department spokesperson Jen Psaki two days earlier in a Washington press conference. Psaki said the US was ‘disappointed’ in Taiwan’s actions in holding the flag-raising ceremony without first consulting with US authorities. Twin Oaks is not a private residence, she said, it is the residence of the de facto representative of Taiwan to the US. She noted that the incident was “not in line with US policy” and stressed that “no US officials were present during the event.”

In Taipei, Zimmer added that the US hopes that Taiwan will take action “to ensure that such incidents do not recur” in the future and to show that the Taiwan government takes the US’s position on its relations with Taiwan seriously.

Zimmer stressed that Taiwan-US relations are still sound, but expressed the hope of the US government that "such things" as the Twin Oaks flag-raising ceremony will not be allowed to happen again.

AIT’s statement was terse but unequivocal. It noted: (1) We reiterate that did not approve or know about the January 1 flag-raising at Twin Oaks in advance. (2) We are disappointed with this action, and we have raised our serious concerns with senior Taiwan authorities in Taipei and Washington. (3) It is our hope that Taiwan will demonstrate the priority it puts on the US-Taiwan relationship by ensuring that these kinds of things do not happen again.

Chen Chien-jen, a former Minister of Foreign Affairs, noted that the Ma government has always stressed a "low-key, zero accidents" policy in its dealings with the US. He advised that Taiwan must be careful in handling its relations with the US, warning that if policies in place are not respected it could have an impact on bilateral relations.

Senior researcher Bonnie Glaser, a specialist in cross-strait affairs at the Washington think tank "Center for Strategic and International Studies," downplayed the incident and China’s strident response, saying that the flag-raising at Twin Oaks “does not mean there is a problem in communication between Taiwan and the US.”