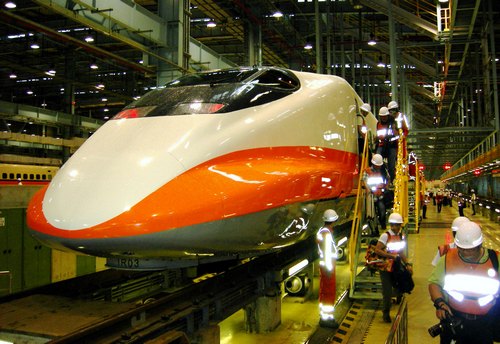 Taipei, Jan. 6 (CNA) The Legislature's Transportation Committee is set to review a government proposal Wednesday for helping the financially troubled Taiwan High Speed Rail Corp. (THSRC) stave off an impending bankruptcy that could come as early as March.
The key points of the Cabinet proposal are granting a 40-year extension to THSRC's concessional rights to operate the Taiwan High Speed Rail, which it built under a build-operate-transfer (BOT) model, affording the embattled company more time to acquire capital and tide over its current difficulties.
But the opposition Democratic Progressive Party (DPP), which governed Taiwan between 2000 and 2008 when the high-speed railway was being built, has been dead set against the government plan to rescue the rail operator.
DPP Chairwoman Tsai Ing-wen said her party opposes the Ministry of Transportation and Communications (MOTC) proposal because it would involve "major benefits in the amount of hundreds of billions of NT dollars" that would go only to "certain individuals" in an opaque transaction. Incumbent lawmakers and former senior government officials from the DPP held a press meeting Tuesday to explain why they oppose to the government proposal. There, they urged ruling Kuomintang (KMT) lawmakers not to ram the proposal through the legislative floor.
Cabinet spokesman Sun Lih-chyun responded that the government proposal is an "all-benefiting" plan that will help THSRC manage its finances by allowing the general public to buy its stocks in 2016.
According to the Transportation Ministry, if the plan wins legislative approval, THSRC will have 59 more years to continue operating on the current BOT model.
Under a MOTC financial model, the rail operator during that time will register a total revenue of NT$3.1582 trillion, from which NT$196.4 billion could be paid to share holders as dividends -- after deducting NT$1.43 trillion in operation costs, NT$550.1 billion in facilities and equipment costs, and NT$316.9 billion in bank loans and NT$485.4 billion in interest payments.
Shih Jun-ji, who served as chairman of Financial Supervisory Commission during the DPP's eight years in power, argued that the MOTC proposal was designed to benefit "certain individuals" and the rail company's future stock holders will be able to reap an annual return on investment of 5.9 percent for 58 years.
"I would call it a proposal that creates a cross-generation unfair distribution of wealth," Shih said.
Yeh Yi-jin, a DPP lawmaker, said if the high-speed rail corp.'s concessional rights were to be extended until 2073, "we would be selling off our next generation's shares. How could we do that?" (By Sofia Yeh, Hsieh Chia-chen, Wang Shu-fen and S.C. Chang)