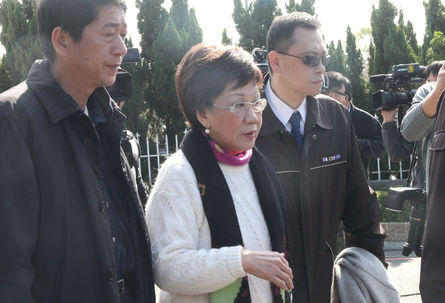 TAIPEI (Taiwan News) – Former Vice President Annette Lu on Saturday denied reports that a demand of hers to share a vehicle with ex-President Chen Shui-bian had prevented him from being released on medical parole before the New Year.
The Ministry of Justice’s Agency of Corrections is scheduled to discuss a report about the imprisoned former head of state’s qualifications for medical parole Monday morning. Lu, who spent four days on hunger strike earlier in the week to underline her demand for Chen’s freedom, canceled her plans to stand outside the Taichung Prison’s Pei-Te Hospital and wait for him to come out.
Unconfirmed reports stated that when she had been outside the hospital on December 31 and expectations were high that Chen would be freed, she wanted to be the first to see Chen leave and that she wanted to join him in the same vehicle.
Because she felt weak after days of fasting, Lu entered the prison hospital to rest. However, new media reports said Saturday that she had the intention to leave the site in the same vehicle as Chen if his release had been approved that day.
Medical advisers to the former president reportedly considered having Chen and Lu travel together for safety reasons. The doctors denied that Lu’s insistence on sharing a vehicle with Chen might have been the reason why he was not released on December 31, as his supporters had demanded.
As expectations were high that he would be allowed to return home later that day, the MOJ said the report from the 15-member medical review committee had not arrived on time at the Agency of Corrections in Taipei because the car bringing it from the Taichung Prison had been stuck in traffic on the freeway. The MOJ later set January 5 as the date for a review of the report by a 10-member committee at the Agency.
On Saturday morning, Chen received the visit of his wife, Wu Shu-chen, who was also sentenced to 20 years in prison on corruption-related charges, but who was allowed to spend the sentence at home because of her health problems. She traveled from her home in Kaohsiung by high-speed train to Taichung and then took a taxi to the prison, where Chen waited for her in a doorway and smiled when he saw her, reports said. The former president reportedly also shook hands with the taxi driver.
Supporters of Chen called on more sympathizers to gather outside the prison Sunday night for an overnight vigil until the ex-president was released.