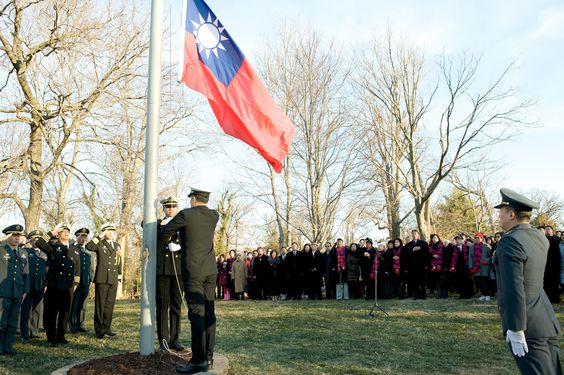 The Republic of China (Taiwan) national flag was raised Thursday at Twin Oaks Estate, the former residence of ROC ambassadors to the United States, for the first time since the U.S. switched recognition from Taipei to Beijing 36 years ago.

The flag was raised during a ceremony held by Taiwan's representative office in the U.S. on the first day of 2015, a move seen as symbolizing significant progress in the Taiwan-U.S. relationship.

It was very meaningful to be able to hold a flag-raising ceremony again at Twin Oaks, said Taiwan's representative to the U.S. Shen Lyushun, one of the attendees at the ceremony.

The improving bilateral ties helped make possible the ceremony, during which ROC military officers posted in the U.S. were able to attend while wearing their military uniforms, Shen said.

The ceremony was attended by several officials from the Taipei Economic and Cultural Representative Office in the U.S., military officers posted in the U.S. and others. They sang the ROC national anthem before the flag was raised to the country's national flag song.

Located in Washington D.C., Twin Oaks was the official residence of ROC ambassadors to the U.S. between 1937 and 1978.

Taiwan was able to retain ownership of the property after Washington severed official ties with the ROC and recognized the People's Republic of China in 1979.

For most of the time since, only cultural and social events have been allowed at Twin Oaks. But as mutual trust between Taiwan and the U.S. improved, Taiwan's representative office was able to celebrate the ROC national day again at the venue in 2011, the first time in 32 years.

In 2014, the national anthem of the ROC was also sung at the national day reception at Twin Oaks, Shen added.

At the flag-lowering ceremony at Twin Oaks on Dec. 31, 1978, before the severing of ROC-U.S. diplomatic ties, then-Deputy Foreign Minister Yang Hsi-kun cited the words of American Army general Douglas MacArthur: "We shall return."

Thirty-six years later, Shen said at the same venue that "we not only returned, but we did it with dignity, respect and honor."

Following Thursday's ceremony, Shen also conferred the Order of Loyalty and Diligence medals on four officers from the ROC Defense Mission in the U.S. in recognition of their devotion to the country.