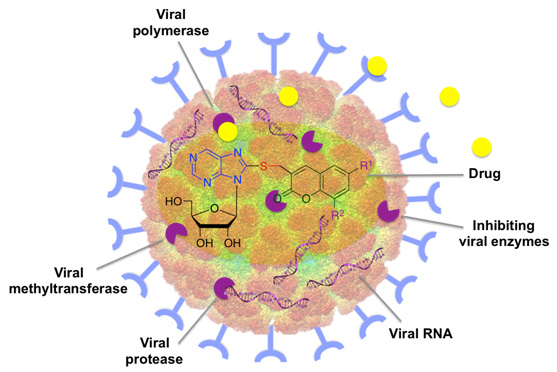 Viruses are small infectious agents that threaten humans, animals, plants, and bacteria. Over the past three decades, viruses (particularly RNA viruses) caused a number of infectious diseases and death of millions of humans according to WHO's report. The recent severe incidents include the ongoing Ebola outbreaks in West Africa, the late Chikungunya outbreaks in the Caribbean Islands, and the 2012 Middle East respiratory syndrome coronavirus outbreaks in Saudi Arabia. Having caused high morbidity rates of affected areas, these infectious diseases posed a real threat to Asia, Europe, and North America due to international travel. Taiwan has also been suffering continuous bombardment of RNA viral diseases during the past decade, such as SARS, enterovirus 71, influenza A (H5N2), the alleged new influenza (H1N1), the resurfaced rabies, and the current dengue fever. The dengue fever could take place spiraling in Taiwan once the epidemic infections are out of control. The piercing mortality rate results from the mutation of RNA viruses and the lack of suitable vaccines as well as drugs against the emerging viruses. Meanwhile, the emerging and reemerging RNA viruses increased rapidly. Many of these are zoonotic variants viruses, which emerge from animal reservoirs.
As the individual virus particle, a virion is made up by an inner genetic material of either RNA or DNA. An outer protein coat called a capsid protects the inner core genes. The capsid of some virions is enveloped within a fatty membrane of lipids. According to the Baltimore classification devised by biologist David Baltimore, a Nobel Prize Laureate, viruses are classified into seven groups based on the mechanism of mRNA production, including dsDNA, ssDNA, dsRNA, (+)ssRNA, (−)ssRNA, ssRNA-reverse transcriptase (RT), and dsDNA-RT. Among them, the numbers of families/groups caused by RNA infections are more than those caused by DNA. For human pathogenic RNA viruses, there are nearly 400 recognized at the present time. Because the virus isolation and identification methods were greatly improved, more and more viral pathogens were found every year.

Because of the continuous discovery of new emerging viruses, European Commission provided a great support to an antiviral drug development project; it is entitled “Small-molecule Inhibitor Leads versus Emerging and Neglected RNA Viruses” (acronym: SILVER). Under the 7th Framework Program, SILVER was funded with a total budget of €12 million from 2011 to 2015. Twenty-four research teams from reputed universities, organizations, and corporations of ten countries (i.e., Austria, Belgium, China, France, Germany, Italy, Netherlands, South Korea, Taiwan, and U.K.) have been working together. The scientists therein come from the field of virology, structural biology, bioinformatics, and medicinal chemistry. With this state-of-the-art drug development project, the Taiwan team is led by Prof. Reuben Jih-Ru Hwu who is an organic and medicinal chemist working in National Tsing Hua University and National Central University. By participating this project, the SILVER team members believed that “it is essential that we be given the maximum opportunity to exploit our findings in the hope of contributing significantly in the control of these emerging, re-emerging, and neglected viral pathogens.”

The SILVER project required affluent numbers of synthetic compounds to explore for identifying the possible drug. In response to this request, Prof. Hwu’s team has successfully created 12 new compound libraries and delivered more than 700 compounds to SILVER partners in Europe for bioassays. Moreover, his team also established the chemo-combination strategy and an unprecedent approach of wrapping functionalized single-walled carbon nanotubes with ssDNA.

Targeting viral proteins and genomes are efficient ways for drug design of antiviral therapeutics. The first is to employ an inhibitor of viral proteins, such as capsid, protease, helicase, polymerase, and methyltransferase. Nevertheless, their potency and selectivity was hampered due to various different structures of viral proteins and enzymes. Thus design and synthesis of new chemical entities, which may tandem and specifically target different stages of the life cycle of viruses, became a fashionable strategy in the rational design of new antivirals. The second new concept is related to the interruption of gene synthesis and expression of viruses. Thus an artificial nucleoside was introduced to mask the nature nucleosides for terminating viral RNA/DNA propagation in the host cell.
Anti-sense RNA is a promising technique for disease therapy. Its challenges are the high mutation rate of RNA viral genes and the limited supply of artificial RNA aptamers. It would be advantageous to be selective when more genomes were camouflaged by a longer molecule or oligomer. As a result, there are still myriad chances for scientists to make the breakthrough in this field.