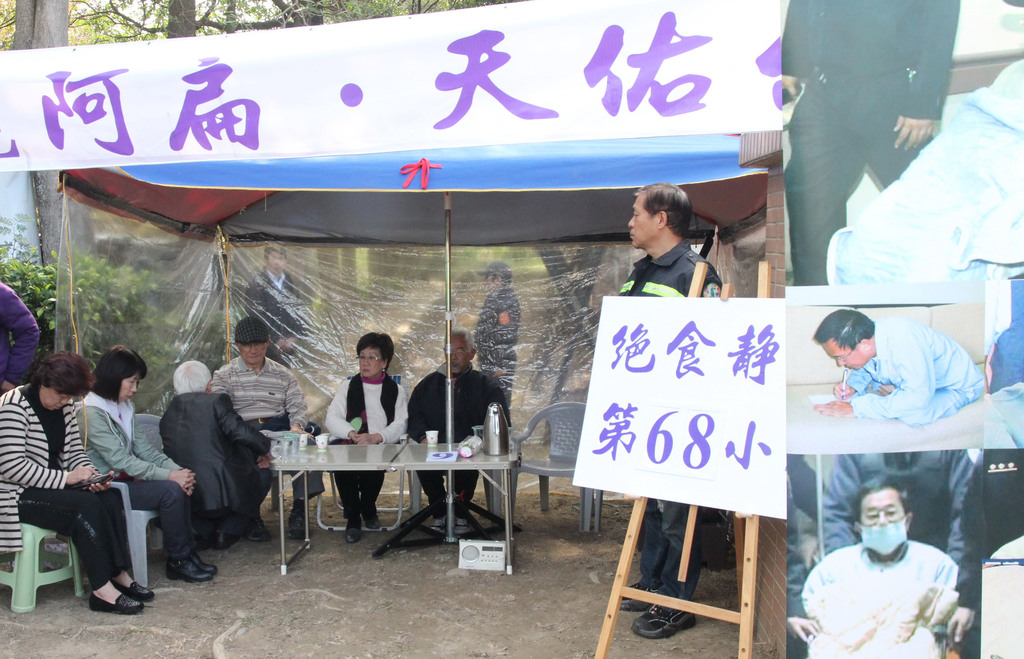 TAIPEI (Taiwan News) – After visiting ex-President Chen Shui-bian at the Taichung Prison during her hunger strike Wednesday, former Vice President Annette Lu stayed at its Pei-te Hospital to rest because she felt weak.
Lu began the fast Sunday afternoon as a sign of support for Chen’s release on medical parole, but on Wednesday morning she moved to Taichung to visit the former head of state.
She reportedly felt weak and there was a risk she might faint because of low blood pressure, so at around noon she was allowed to rest at the prison hospital where Chen stays, reports said.
During her meeting with the former president, he told her that his family had received no notification whatsoever that his release was imminent. A 15-member medical review team concluded that he should receive medical parole and be allowed home for more effective care, but the approval for the measure has been caught in red tape between a hospital, the prison and the Ministry of Justice Agency of Corrections.
When Lu told him he could be packing his bags to prepare for his departure, Chen refused, saying he had already been fooled too many times.
Police increased reinforcements outside the prison as more and more supporters arrived outside. Lu initially wanted to hold a hunger strike to obtain Chen’s release before Christmas, but she later postponed her action to call on the authorities to let him return home before the New Year.
There was still no sign from the authorities early Wednesday afternoon that Chen was about to leave the prison.
The Ministry of Justice said it will deal with the issue swiftly but there was no promise that he would be able to return home before the end of the day. The medical team’s report had to be sent to the prison, which then should pass it on to the Agency of Corrections, officials said.
The Taichung Prison was reportedly still in the process of assessing the medical team’s report Wednesday morning, officials said. At the end of the procedure, the Taichung District Prosecutors Office would set bail, and a guarantor domiciled in Taichung City might have to be appointed, reports said. Former Defense Minister Michael Tsai, who accompanied Lu on her visit to Chen and who also took part in the fast, said he was prepared to serve as the ex-president’s guarantor.
However, later media reports pointed out that might not be possible as Tsai had been indicted for leaking confidential government information. He denied the charges, but the courts had not issued a final verdict in his case yet, which could prevent him from serving as guarantor.
Earlier, Lu said that if Chen was still in prison New Year’s Eve, she would call on his supporters to gather outside the Presidential Office Building in Taipei Thursday morning to raise pressure on President Ma Ying-jeou. The location will be the site of an annual flag-raising ceremony attended by the public early on New Year’s Day.
Chen served more than six years of a 20-year prison sentence and was fined NT$250 million (US$7.9 million) for a series of charges including corruption and money laundering. He was first detained in late 2008, months after leaving office, before his trial began.