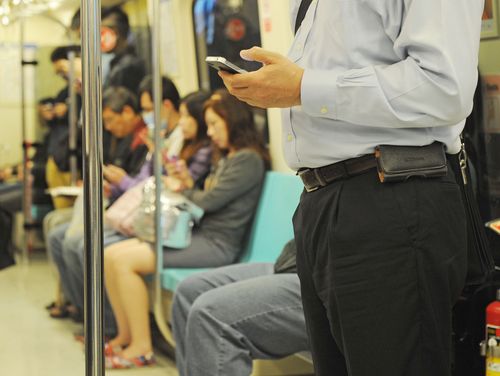 Taipei, Dec. 30 (CNA) People in Taiwan spend more than an hour a day on average on the instant messaging application LINE or on the social media site Facebook, according to a survey released Tuesday.
The poll suggested that Taiwan residents depend heavily on messaging apps and social media for interpersonal communication, said Foreseeing Innovative New Digiservices (FIND) under the government-sponsored Institute for Information Industry.
LINE and Facebook have become two of the most popular applications among mobile device users in Taiwan, who are averaging about an hour a day on those two apps, said FIND, which conducted the survey jointly with Mobile First from Oct. 10 to 31 among Taiwan residents over the age of 11. Taiwanese have also become used to playing games on their mobile devices, spending 52.6 minutes a day doing so, FIND said, citing the poll, which found that social media/instant messaging, entertainment and gaming apps were the most popular in Taiwan.
This year, Taiwanese spent an average 132 minutes a day on mobile device apps, with people in the 20-34 age group averaging 2.5 hours a day, the survey found.
FIND said that only about 6.2 percent of local users are willing to pay for apps, although 74.4 percent of Taiwanese usually download them.
The survey showed that the average number of apps downloaded in Taiwan this year fell to 18.7 per person from 22.5 last year.
In the over-11 age group, 14.32 million people in Taiwan owned smartphones, tablet computers or both in the second half of the year, compared with 1.01 million in the first half, according to FIND.
In the breakdown, it was found that 13.55 million owned smartphones, which represented a penetration rate of 65.4 percent, while 6.04 million had tablet computers, indicating a penetration rate of 29.2 percent, FIND said. (By Jalen Chung and Frances Huang)