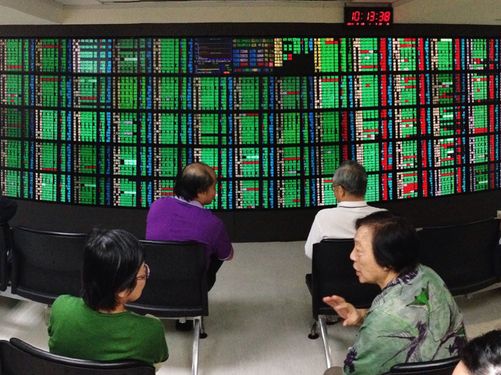 Taipei, Dec. 29 (CNA) Several securities investment firms on Monday welcomed a plan to expand the range stock prices can fluctuate in a single trading session that is expected to be put in place in the second half of 2015.
The prices of stocks listed on Taiwan's equity markets are currently not allowed to go up or down by more than 7 percent in a single day, but that ceiling will be changed to 10 percent under the new plan.
Kevin Lin, vice president of Caizischool Co., said the move will help Taiwan be more open and be more aligned with international markets, which he said "is a step in the right direction."
Lin questioned if this would help bring about increased turnover, however, because the key to investing in the market is still industrial development and fundamentals.
Alex Huang, an executive with Mega International Investment Services, said limiting daily fluctuations of stock prices to 7 percent up or down was too restrictive, and he agreed that the ceiling should be set at 10 percent to help digest sudden buying or selling sprees.
Financial Supervisory Commission (FSC) Chairman Tseng Ming-chung said Monday that the permitted daily fluctuation of share prices in Taiwan is among the most restrictive in Asia and asked out loud, "How can Taiwan's markets allow only 7 percent?"
In a Facebook post on Sunday, Tseng said that with the capital gains tax on stock profits sure to be postponed until 2018, the FSC is now working with the Taiwan Stock Exchange and GreTai Securities Market on a plan to develop Taiwan's equity markets.
Tseng said his agency will also review the reasons why daily turnover has contracted over the past decade and look at measures to deal with the issue.
The FSC will first review the proposed change to allow stock prices to go up or down a maximum of 10 percent in a single session, he said.
Sources said the FSC is considering the move because the 7 percent range is well below the level seen elsewhere in Asia.
China limits daily stock price fluctuations to 10 percent, South Korea to 30 percent (beginning next year), and Japan to between 14 and 30 percent. Singapore and Hong Kong do not impose any limits on daily price changes.
Another reason for the change is that Taiwan's investors are already used to trading without any share price restrictions because that's how things operate in the first five days of an IPO.
The move may also be a way to get individual investors more involved in the market again, the sources said.
Individual investors used to account for 70-80 percent of total turnover on the main stock exchange but that has dropped to 60 percent in recent years as institutional investors have been more willing to jump into the market. That ratio in Chinese markets remains at about 80 percent even as stock prices can go up or down 10 percent in a day, signaling that Taiwan is too conservative. (By Esme Jiang, Wu Ching-chun, Milly Lin and Lilian Wu)