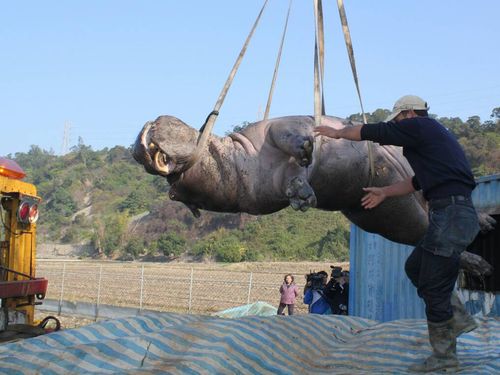 Taipei, Dec. 29 (CNA) An autopsy confirmed Monday that A He, the hippo that first jumped from a moving truck and later fell several meters, died from a torn diaphragm.
Taipei Zoo, which performed the autopsy, said there is a 30-40 centimeter rupture on the right side of the hippo's diaphragm which caused a lung to slip from the chest cavity to the abdominal cavity.
A He, who belonged to a private leisure farm in Taichung, was found dead early Monday morning in a pond where it was given shelter since Saturday to recuperate from its series of injuries that started the day before.
On Friday, A He jumped from a truck and broke one of its legs while being transported from a temporary shelter in Miaoli after renovations wrapped up at its enclosure at the Skyzoo recreational farm in Taichung, where it has been kept for eight years.
It suffered yet another fall Saturday as it was being moved to a pond for treatment. The accident occurred when a cable on a hoist broke and the container in which the hippo was being transported crashed to the ground from a height of 2 meters. A He's owner could face up to a year behind bars as well as fines under animal protection laws, according to the Council of Agriculture. (By Huang Yi-han, Y.F. Low, Wesley Holzer and Lee Hsin-Yin)