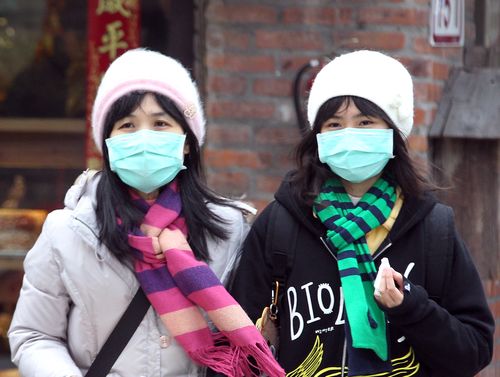 The bureau has issued a cold weather warning to areas as far south along the west coast as Tainan and open coastal areas in northeast Taiwan, as well as the outlying islands of Kinmen and Matsu.

Highs on Tuesday could hit 19-22 degrees, with cloudy to sunny skies likely in most areas, the bureau said.

The cold weather could ease up temporarily late Tuesday, forecasters said, warning however that another cold air mass will again send the mercury plunging to around 10 degrees on New Year's Eve. (By Lee Hsin-Yin)

The western half of Taiwan was suffering Monday under a haze of concentrated air pollutants riding the cold air mass that has moved in from China, according to data from the Environmental Protection Administration (EPA).

Under the EPA-applied index of fine particulate matter smaller than 2.5 micrometers (PM2.5), the Taiwan-controlled islands of Kinmen and Matsu off the coast of China ranked a 10 on the 1-10 scale, according to the latest data on the EPA's Taiwan Air Quality Monitoring Network website.

Most areas on Taiwan proper recorded PM2.5 levels from 7 to 9. Hualien and Taitung, separated from the western half of the island by high mountains, had relatively cleaner air quality with a particle pollution level of 5.

Level-10 particle pollution means the PM2.5 concentration is higher than 72 micrograms per cubic meter. Measurements above level 7 are deemed severe enough to cause tangible discomfort and health problems.

The EPA advised avoiding outdoor activities for elderly residents of affected areas as well as those with lung problems, heart problems, and coughs or discomfort around the eyes.

People with asthma may also need to use their inhalers more often than normal while the pollution persists, it said.

The seasonal air pollution is expected to ease only slightly in the next two days, with the particle pollution level in most parts of Taiwan proper expected to hover between 5 and 9.

As of Monday afternoon, no predictions of particle pollution levels on Kinmen or Matsu were available.

(By Hsu Chih-wei and Elizabeth Hsu)