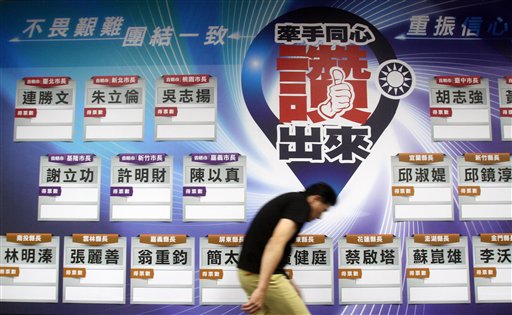 TAIPEI (Taiwan News) – The main opposition Democratic Progressive Party dealt a devastating blow to President Ma Ying-jeou’s Kuomintang Saturday, taking control of four out of six special municipalities and winning nine out of 16 other cities and counties as well, while independent Ko Wen-je defeated Sean Lien in the capital.
The result went far beyond the worst predictions for the KMT, which could lead to Ma’s removal from the party chairmanship. Within hours after the party’s defeat became clear, Premier Jiang Yi-huah announced that his resignation had been approved. KMT Secretary-General Tseng Yung-chuan reportedly also left office, but Ma held on to his position.
While opposition victories had long been heralded by opinion polls for Taipei City and Taichung City, the KMT also suffered a major upset in Taoyuan, where the DPP candidate unexpectedly became the first mayor of the newly upgraded special municipality.
In Taipei City, Ko, the outspoken independent surgeon backed by an opposition alliance including the DPP, won with about 57 percent or more than 852,000 votes against an estimated 41 percent or about 610,000 votes for Lien. None of the five other candidates who registered made any significant impact.
The result “showed the determination of the people of Taipei to seek progress,” Ko said in his victory speech.
In Taichung City, DPP lawmaker Lin Chia-lung succeeded in dislodging former Foreign Minister Jason Hu after 13 years in the mayoral position. The Central Taiwanese city was seen as an important area on the way to the 2016 presidential election, since the area is not regarded as any camp’s stronghold. Whichever party wins Central Taiwan knows its support across the country is rising, observers said. Lin received 57 percent of the vote, Hu about 42.9 percent, reports said.
Neighboring Changhua County, the most-populated area outside the six municipalities, also profited from the DPP sweep of Central Taiwan, electing Wei Ming-ku instead of KMT lawmaker Lin Tsang-min.
A major surprise came in Taoyuan City, where former government spokesman Cheng Wen-tsan unexpectedly beat incumbent John Wu, a son of KMT Honorary Chairman Wu Po-hsiung.
Kaohsiung’s popular DPP mayor, Chen Chu, won re-election as expected against Minister without Portfolio Yang Chiu-hsing, a former DPP Kaohsiung County magistrate who defected to the KMT. Almost 1 million voters in Kaohsiung cast their ballot for Chen, more than double the number for Yang. She also won 33 out of 66 seats on the Kaohsiung City Council, with one seat for the allied Taiwan Solidarity Union.
In neighboring Tainan, incumbent DPP Mayor William Lai defeated National University of Tainan President Huang Hsiu-shuang by 72.9 percent to 27.1 percent.
One and a half hour into the ballot counting, even the two areas where the KMT was not thought possible to lose, New Taipei City and Taoyuan, saw their candidates trailing their DPP challengers in preliminary results broadcast by cable stations.
In the end, the KMT was left with only one out of six special municipalities. In New Taipei, incumbent Eric Liluan Chu won with just about half the vote and about one percent ahead of the DPP’s ex-Premier Yu Shyi-kun. Chu has widely been depicted as the most likely frontrunner for the KMT nomination in the 2016 presidential election.

The DPP landslide also struck the races for the 16 other city mayors and county magistrates. The opposition party increased its total from four to nine while the KMT fell to five seats from eleven.
The DPP wrestled control from the KMT in Keelung, Hsinchu City, Changhua, Chiayi City and Penghu while holding on to Yilan, Yunlin, Chiayi County and Pingtung.
In Hsinchu City, DPP challenger Lin Chih-chien unexpectedly ousted KMT incumbent Hsu Ming-tsai, despite the presence of dissident former DPP mayor James Tsai on the ballot.
At the top of the island, the harbor town of Keelung chose DPP candidate Lin Yu-chang, who profited from divisions inside the KMT. The ruling camp picked former National Immigration Agency chief Hsieh Li-kung as its candidate after its original nominee, city council speaker Huang Ching-tai, was detained on accusations of corruption.
The DPP did not have a problem holding on to Yilan County, a traditional stronghold, with incumbent Lin Tsung-hsien fighting off KMT challenger Chiou Shu-ti.
Taichung DPP mayoral candidate Lin repeatedly shared the campaign platform with his two colleagues in Central Taiwan. In Changhua, DPP lawmaker Wei Ming-ku ended rule by the KMT by beating legislator Lin Tsang-min without being affected by the candidacy of former Taiwan Solidarity Union lawmaker Huang Wen-ling. She was running as an independent even though her former party backed Wei.
The south is traditionally a DPP stronghold, but not every single area has been held by the opposition party. In Yunlin County, Lee Chin-yung succeeded in keeping the region in DPP possession against powerful factional candidate Chang Li-shan.
Incumbent Chiayi County Magistrate Chang Hwa-kuan fought off a challenge by the KMT’s Weng Ching-chun.
In a key battle in the southern city of Chiayi, former Health Minister Twu Shiing-jer ended 31 years of rule by female mayors, beating the KMT’s former Youth Minister Chen Yi-chen, a member of a powerful business dynasty.
At the southern tip of the island, DPP lawmaker Pan Men-an defeated former Cabinet member Chien Tai-lang.
On the sparsely populated East Coast, independent Fu Kun-chi was re-elected as Hualien County magistrate despite a challenge from KMT candidate Tsai Chi-ta. There was no DPP candidate for the top county office.
Penghu County, in the middle of the Taiwan Straits, saw the DPP’s Chen Kuang-fu as the earliest candidate in the nation to declare victory, after having beaten KMT candidate Su Kun-hsiung, the mayor of the archipelago’s capital of Makung.
Even the offshore island of Kinmen close to the coast of China’s Fujian Province did not stay outside the wave of change. Chen Fu-hai, one of nine independent candidates, succeeded in beating KMT incumbent Lee Wo-shih.
The counties remaining under ruling party control were Hsinchu County, Miaoli, Nantou, Taitung and Lienchiang, better known as the island of Matsu.