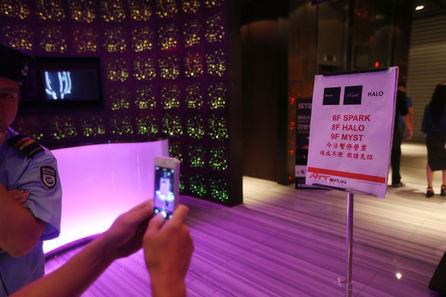 Taipei’s Spark Nightclub, the site of a confrontation which left Xinyi District police officer Hsueh Chen-kuo dead from a mob beating, is shutting its doors. An announcement on the club’s website Tuesday said that the owners had decided to close down operations after constant visits and inspections by police officers following the incident.

The announcement noted that Taipei Mayor Hau Lung-bin had promised a crackdown on troublesome nightclubs and vowed to “drive them out of business.” It added that there are at least eleven other nightclubs still operating in that area of Xinyi District and said police should keep up their vigilance and work to prevent further trouble in other clubs.

Statistics provided by the Taipei Police Department shows that at the time of the fatal incident there were 12 nightclubs operating in Xinyi District, plus three in Sungshan District and one in Da-an District. After the September 13 incident three clubs in Core Pacific City closed down, and now Spark’s announcement brings the number of clubs that have shut down to four. The principal reason behind the shutterings has been a loss of business following the violent confrontation at Spark.

Spark first opened in the base of Taipei 101 and later moved to the ATT 4 FUN building, boasting a décor that set the standard for night clubs in the area. Word spread that the club was a nighttime hotspot in the city, even attracting visitors from overseas to drop in. The club’s announcement that it was shutting down left some Internet visitors asking, "Are they really closing it down?"

Business at other venues in the ATT Building were reportedly feeling the effects of publicity from the incident and the subsequent police presence in the night club and surrounding area. A nearby supermarket reportedly was seeing a 30% drop in business following the mob violence. One clerk in a shop in the ATT 4 FUN building expressed relief at the news that night club was closing, saying, "I hope all the attention and limelight are the past and someone else will lease the space."