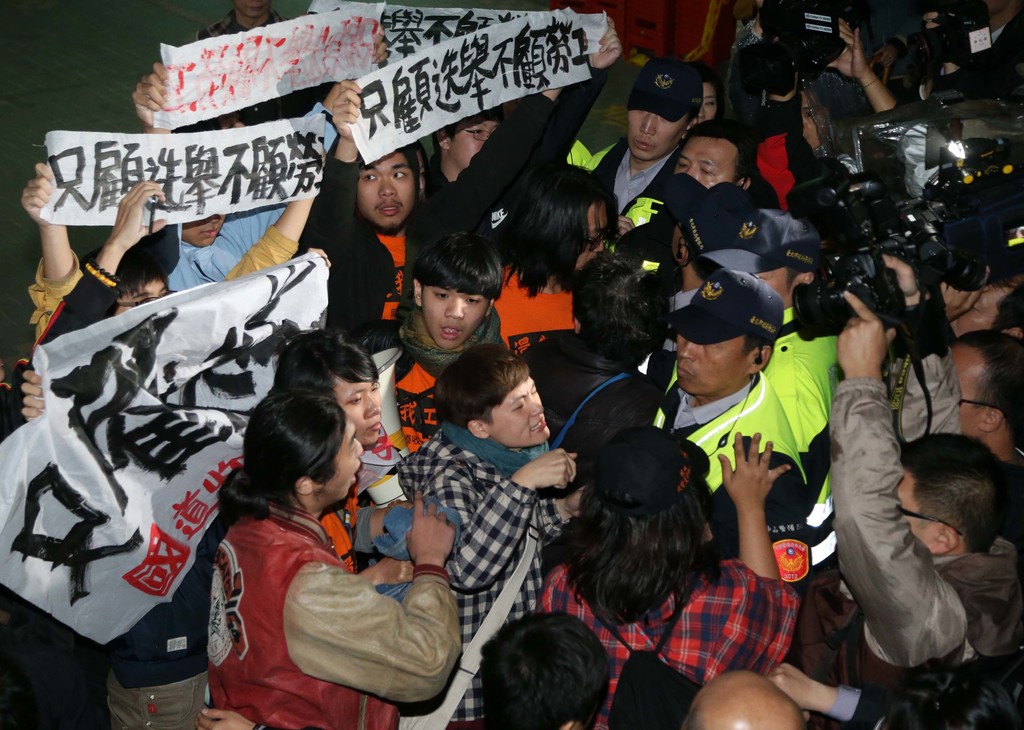 TAIPEI (Taiwan News) – Former employees of Hualong Textile Co. and laid-off highway toll collectors clashed with police outside the headquarters of the ruling Kuomintang Wednesday.
The laid-off workers at the troubled Miaoli County-based company have been clamoring for years to demand back wages, pension benefits and severance payments dating back as far as 2003. Toll booths on Taiwan’s highways were torn down after an electronic collection system was generalized, leading to dissatisfaction from former toll collectors unable to find new jobs.
As the KMT held its weekly Central Standing Committee meeting Wednesday afternoon, members of both groups gathered outside the party’s Taipei headquarters. The protesters accused the party and its chairman, President Ma Ying-jeou, of only caring about the November 29 local elections and forgetting about the interests of the working class.
As the former workers tried to approach the building, police stopped them and clashes erupted.
Because the protesters were kept at a safe distance from the KMT offices, their shouts were reportedly not heard inside at the party leadership meeting.
They demanded a meeting with the ministers of labor and transportation, and warned they would occupy a freeway on November 28, the eve of the elections.
The associations representing the ex-workers have been noted for organizing impromptu mass events, including the occupation of a railway station platform, of freeway intersections and of the lobby at the Ministry of Labor building, a march, and a sudden protest outside the Presidential Office Building last month.
At the last event, on October 9, police had to carry away an estimated 150 protesters who sat down along Ketagalan Boulevard in an event which had not been applied for. The group had reportedly chartered four buses to bring supporters up from Miaoli County.
The Hualong activists have repeatedly demanded government action on their behalf and amendments to the Labor Standards Act which would prevent their situation from happening to other employees at troubled companies.